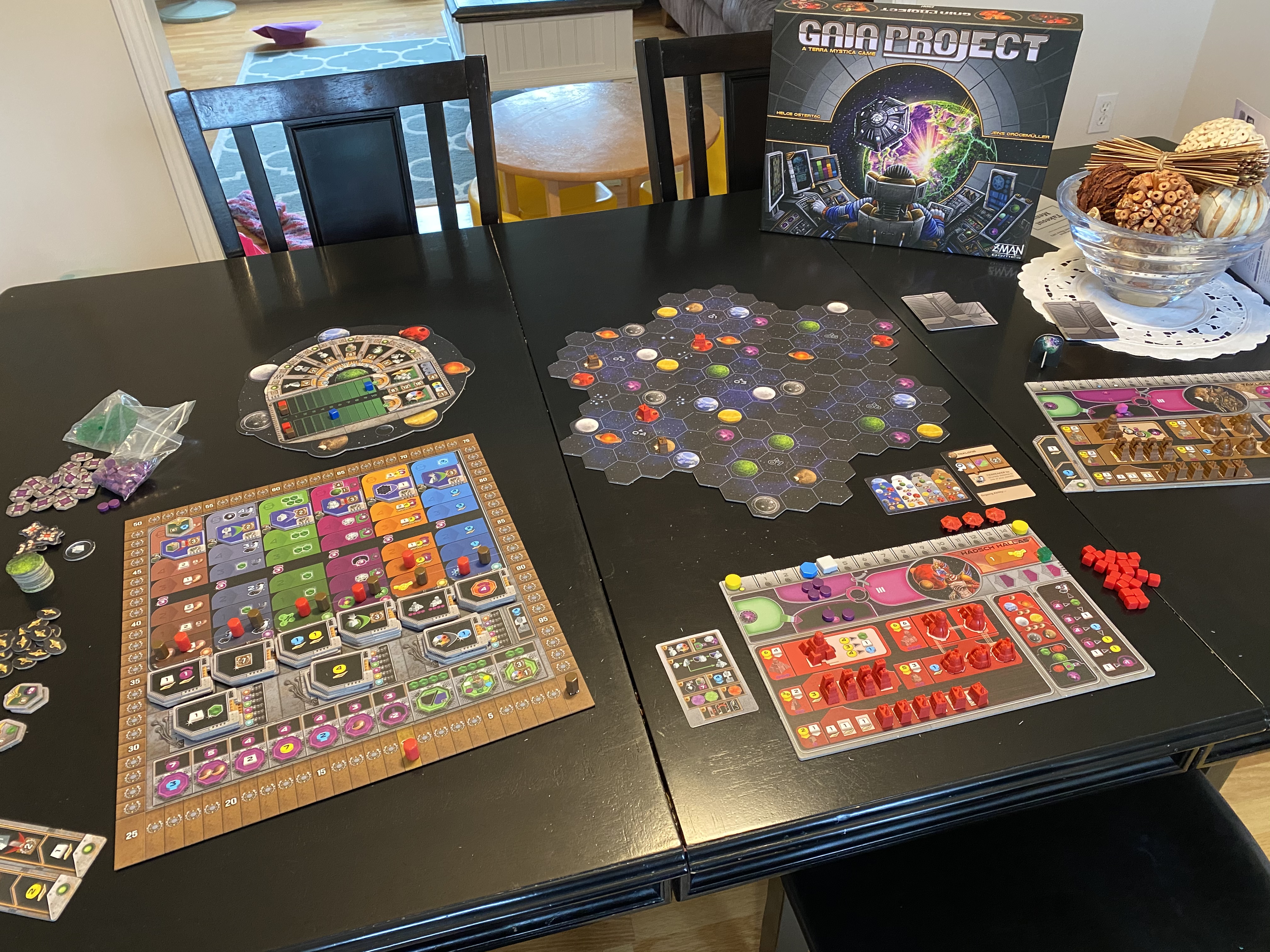 #Gaia Project is a truly amazing game featuring various unique factions spreading their influence, colonizing, and terraforming various planets throughout the galaxy. The game has a significant engine building aspect, along with resource management, technology trees, and a really clever influence/power system.

The game is played over 6 rounds. Rounds themselves last until all players have passed and thus can last an indeterminate amount of time. Each player can pick from a myriad of actions on a turn - spending resources to build a building, researching a technology, taking a special action, terraforming a planet, etc.

Once all players have passed in a round the game advances. A unique twist - the first person to pass in a round is able to pick first from the pool of bonus action tiles. Bonus actions can be really powerful and it's definitely a tough choice if you want to pass first or try to squeeze in a couple more actions.

There are also two overall game goals that score at the end of the game. These are usually more substantial goals - for example colonizing on each of the different planet types - and are tracked on the round marker board.

That's a super rough outline of the game - my apologies if it was hard to follow. Now to get into the Brian's Battery review:

(++) Component quality is great. The cardboard tiles are hefty and made of a good, strong material. The plastic pieces are really detailed and satisfying to manipulate. The hexagonal game board pieces are really nice and the artwork is clear and functional. I think overall this game looks a lot better in person than it does in pictures. While not objectively beautiful like#Root or#Scythe it's definitely got a charm and style all it's own.

(+) The rulebook is fine. It has great examples and is clearly written. The quality of it is acceptable. The solo rules are particularly well done.

(+++) The solo AI done by the Automa Factory is absolutely amazing in this game. I've played several games that feature their work and this is by far the best job they've done. It's a tremendously clever system that utilizes cards and it really feels like you are playing against a real opponent. It's also a great challenge- after winning the walkthrough scenario I have yet to defeat the AI.

(+++) Faction asymmetry is incredible in this game. There are 14(!) unique factions and they all play differently. From afar the differences may not seem significant but once you are playing they become quite clear. And game changing. I've only tried 3 of the factions and my games have all been incredibly different.

(+++) Variable setup and Game goals. Each map is built randomly (*If preferred by the players you can build a standard map each time*), round and end game goals are selected from a pool and are random each game, bonus actions are selected from a random pool, technologies are randomized, and more. Basically the setup of this game is so variable you are extremely unlikely to ever play the same game twice. And that's absolutely phenomenal.

(++) The depth of strategy in this game is fantastic. So many agonizing (in a good way!) choices. So many different ways to build your engine. Just an incredible experience from top to bottom.

Gaia Project has rocketed to the top (or very near the top) of my favorite solo games of all time. It is an incredible, challenging, and ever varied experience. One of the best games I've ever played.

Sounds so good. I am looking forward to playing it.

I do have several questions.

Can you throw the AI into a multiplayer game as a extra player?

Can you play as any of the 14 factions? Somehow I was thinking that you could play only with one of 7 if you were playing solo.

Not sure about adding the AI to a normal game. Maybe?

You can play as any faction but the AI is only set up for 7 factions. Each color has 2 leaders with different abilities but the AI doesn't have a way to differentiate that. So there are 7 potential opponents.

I love that you love this game!! It really is such a delight! Hopefully you can get some multiplayer plays in eventually because it really is fun to play with a friend or two. The Automa functions well and is competitive but it does not beat human interaction!

I really hope to play it multiplayer eventually

Do you have anyone in your group interested in it?

Interested? Sure. Available? No. Also we have at least 3 other games to play first once we are able to meet in person again. The one guy's wife is so scared of the virus she won't let us meet.

That makes sense, it is a weird time man. Gotta respect people, but it is also frustrating!

What other games do you have in line?

Have you gotten to play it multiplayer at all?

Do you think you'd enjoy it more or less at multiplayer? I know you play a lot of solo games

Good question. I think it'd be just as great, but in a different fashion. Except I'm sure it would take a lot longer.

Great review! Now it looks like this has jumped near the top of my wish list. Automa Factory does some great stuff with their solo/AI variants.

Nice round-up, I have occaisionally seen this game but never really read past a brief description.

Does the variability of the set-up drastically change how you would approach a game or is it more giving you a different variantion on the same puzzle? Kind of like say the set-up of dominion vs settlers of catan?

Thanks! Neal did a great job answering so just read his response!

YES, there is a lot of variability in set up, you can change maps, which change which factions will be ideal. The round scoring change every game, there are technology tiles that are placed out on the tech tree differently that impact which direction you go, even advanced tech tiles impact which track you want to go up. There are even round bonuses that you get each turn that are not the same every game. You really need to be able to evaluate every time what faction is ideal for the current situation, and even then you are not guaranteed to win.

If forgot that the end of game scoring tiles are variable as well! So many juicy decisions. There is little to no luck once the game begins, everything is set and you have to maximize the situation you are in.

Your enthusiasm is infectious, I am now wanting to try this out!

I agree with Skurvy's comment below, it really is an excellent game that burns your brain! A little pricey, but an excellent experience.

Eyes now firmly open for it.

I don't think you'll be disappointed!