Pacific Rails Inc.: A Game of Railroad Building for 2 to 4 Players

Growing up I lived along an old railroad bed, and we would pick up heavy spikes left behind long ago. As I felt their weight in my hand, I would think about how those spikes would have been driven into thick wooden ties by hand. Building a railroad was grueling work.

The Pacific Rail Road Act of 1862 chartered two companies and tasked them with building a transcontinental railroad. It took 7 years, over every sort of terrain, until finally in 1869 they met in Utah. With the completion of the Transcontinental Railroad, for the first time, the US was connected from coast to coast.

In Pacific Rails Inc., you are the President of your own Railway Company, with a contract to build a railroad from one side of the board to the other. To do this, you hire specialist workers, build an economic engine, and manage your resources to complete the connections first.

You can get a copy of Pacific Rails Inc. with Stretch Goals and a Vesuvius Media Loyalty Credit for their next Kickstarter for only $35, or the Deluxe Edition with upgraded tokens as well as the Stretch Goals and Vesuvius Media Loyalty Credit for $60. If you are a retailer, or you are interested in a group pledge, there are pledge levels for those options as well. Check out the campaign before it ends on January 27, 2020.

Pacific Rails Inc. is an engine building, resource management, worker placement, network/route building game for 2 to 4 players. The goal of the game is to connect the east coast with the west coast with a continuous track.

To succeed, your workers need to gather resources, lobby Congress for funding, and hire specialists to help manufacture tracks. You must place bridges, tunnels, and rails to travel through the harsh terrain. You also need to build train stations and telegraph posts to connect remote cities.

The game comes with detailed artwork by Damien Mammoliti, known for his work on Brass, Nocturion, and more.

Pacific Rails Inc. comes with a many different custom components. As stretch goals are unlocked, they are becoming even more detailed. For example, here are the upgraded trains and workers:

And if you select the Deluxe level, it includes upgraded tokens and miniatures to replace the Telegraph and Town Tokens, with other options on the verge of being unlocked.

Pacific Rails Inc. is language independent. The game's components have no text. Players can download the rulebook for the core game and its expansions in several supported languages (eg. English, Portuguese, French, German, Greek, Spanish, Italian, and more), after the end of the campaign.

The Kickstarter campaign has videos, a link to the current rulebook, information about group orders, and more, so be sure to check it out before it ends on January 27, 2020. 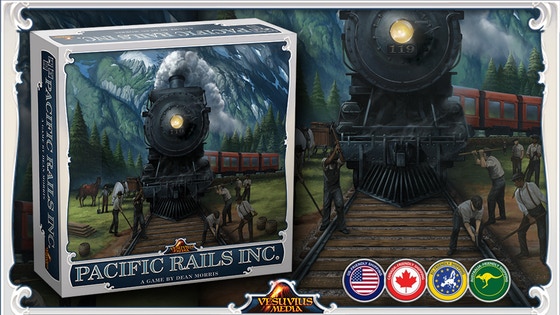 Looks like a beautiful game. Just don’t know if it would be for me...

I think this looks beautiful.