Destiny Aurora is the story of Jayce Carver, an inspector whose investigations take him throughout the galaxy, interacting with myriad races and people on both sides of the law. He is tracking the assassin Kunlore Thorne - the man who murdered his Senatorial Wife, while Jayce was tasked with protecting her. The universe is a dangerous place and only the quick witted, the clever, and the brave will claim success and infamy.

The Destiny Aurora RPG is available as a PDF for only $20, or as a printed version signed by the creator for only $40. Both pledges include the digital version of Issue #1 of the Destiny Aurora Comic Book and your name in Special Thanks of the RPG book. If you don't already have a copy of the Starfinder Core Rule Book, you can grab one of those as well.

This campaign also gives you a chance to pick up one of the last 200 copies of the Destiny Aurora: Renegades board game, if you missed out on it earlier. Expansion miniature sets are available for $15.

About the Destiny Aurora RPG

The Destiny Aurora RPG is Starfinder-compatible. Starfinder is a roleplaying game evolved from Pathfinder and designed for science fantasy adventures. The Destiny Aurora Universe is filled with both lawful and unlawful types. You may be a criminal, a cop, or something in between.

In the Destiny Aurora RPG, you can create amazing new characters, equip them with futuristic tech and weapons, and select a ship to take you to your next adventure. During character creation, you will choose the faction of the ship and crew. Each faction will play differently than the others, with unique goals and personalities.

Factions include Coalition Officers, who investigate crimes and track down inter-galactic criminals, Renegades, made up of mercenaries and pirates, and the chaos-loving and anarchist Dregg faction.

Each of your five core bridge crew members will have their own specialties and abilities that will help you complete jobs and missions. You may also have consultants, additional helmsmen, etc. If you don't have enough crew to fill all of these stations, you may also automate the station by using a holographic officer or the A.I. of the ship itself.

Your ship will be unique to your faction. The Coalition ships have a unique wing design, while the Renegades are constructed with a variety of shapes and sizes. On the other hand, the Dreggs love to use spikes in their ship designs. This is your chance to be creative.

Destiny Aurora has reputation system that is based on your ship. Your ship docks, it's the name of the ship that will get the reputation, not the individual crew members manning it. Your success as a team is what will get you better jobs in the future or have your career fall into the gutter. Each faction has its own reputation system.

The book includes planet descriptions as well as a new star map to allow you to set course to the cosmos beyond that of the Starfinder universe. New creatures for you to battle or tame. Find allies or make enemies, the choice is yours.

Destiny Aurora: Renegades is a fast-paced, sci-fi adventure game where you can choose to play either as the criminal band of Renegades or the Coalition trying to bring them to justice.

Several miniature sets are available. They look like a lot of fun to paint:

There are lots of great add-ons, including graphic novels (available autographed, or digitally), a two-sided map, a resin badge, and more, so be sure to check out the the campaign before it ends on January 27, 2020. 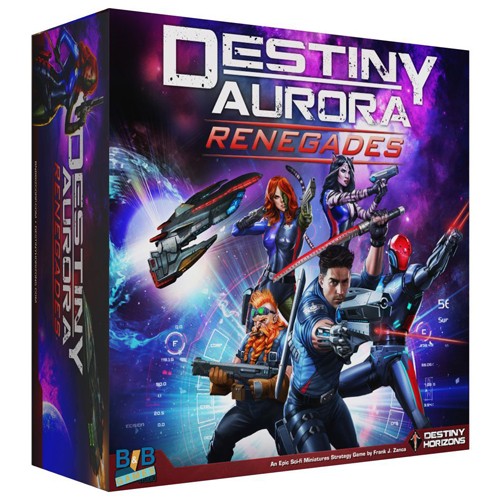 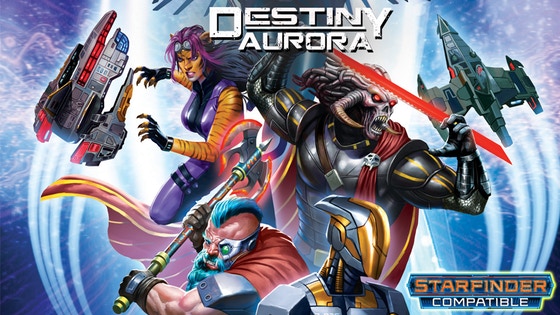 I WANTED THIS BOARD GAME SO BADLY. I've seen it at spiel twice and it's just so cool! co-op!!