I picked up Sentient in a trade a couple of months back, and at that time I played two-handed against myself just to learn the rules, but I finally got to play it with another person over the weekend.

I'll admit that initially drew me to the game was the aesthetics. The dice are so great, and the art on the cards is pretty cool. What kept me interested after that initial hook was the interesting puzzle-like gameplay that the game seemed to offer. A short summary of the theme is that you are playing rival corporations attempting to program the best sentient robots, and attracting investors from different economic sectors. After plugging them into your network, they will affect your system, so you'll need to anticipate those effects.

In terms of gameplay, it's (roughly) equal parts card drafting, dice manipulation, and set collection. Yeah, the gameplay is pretty abstracted from the theme, but I think it works. I haven't spent much time thinking about it, but I don't know of a theme that would be more applicable.

I won't spend a lot of words on how the game is actually played; you all can look up rules or videos if you'd like. The short version is that the main thing you'll be doing on your turn is drafting a "robot" from those that are available, and "plugging it in to your network" (placing it below your player board), and then adjusting the dice based on the card. The decision of which card to take is based on how many points it will give you for fulfilling its conditions (which are related to the state of the dice on either side of the card), and whether or not you think you can fulfill those conditions, and to what degree. The set collection element comes in the form of different "suits" of cards, which are multiplied by the number of matching investor tokens you have collected by the end of the game. So that's the other part of the decision you're making when you take a card - which suit is it, and which investors am I courting by taking this one?

Overall, the decisions are interesting, in my opinion. This game is a puzzle. You can't do much to mess with your opponent, other than mess with the cards that are available and the investors you're both chasing. I'll give you an example. In the final round, there was a card available that would give 7 points (a pretty good amount) if BOTH dice on either side of it were 5s. One of my dice was at 6, and the other was at 1, but this card would decrease each die face by 1 - changing them from 6 -> 5, and 1 -> 6 (numbers wrap). I took it as a gamble - would I be able to a) keep the 5 that I just set, and b) would I be able to decrease the 6 another time with a subsequent card, while also fulfilling that card's requirements? Well, it worked out, and I won by 2 points: 79-77.

I like this game. It's puzzley, but not too brain-burning. It's kind of relaxing. There's not so much going on that you feel like you're juggling knives, but there's a decent amount of "turn angst" around whether or not you'll be able to fulfill a card's requirement, and whether to take a card for the explicit points it gives you, or for the investor influence it gives you. It's a bit abstract, and I think because of that it takes a slight knock in terms of accessibility, but I don't have any worry about teaching it to my wife or anyone who's reasonably familiar with modern games. I like it, and I look forward to future plays.

Here's a cool pic of it I swiped from BGG user jipipu: 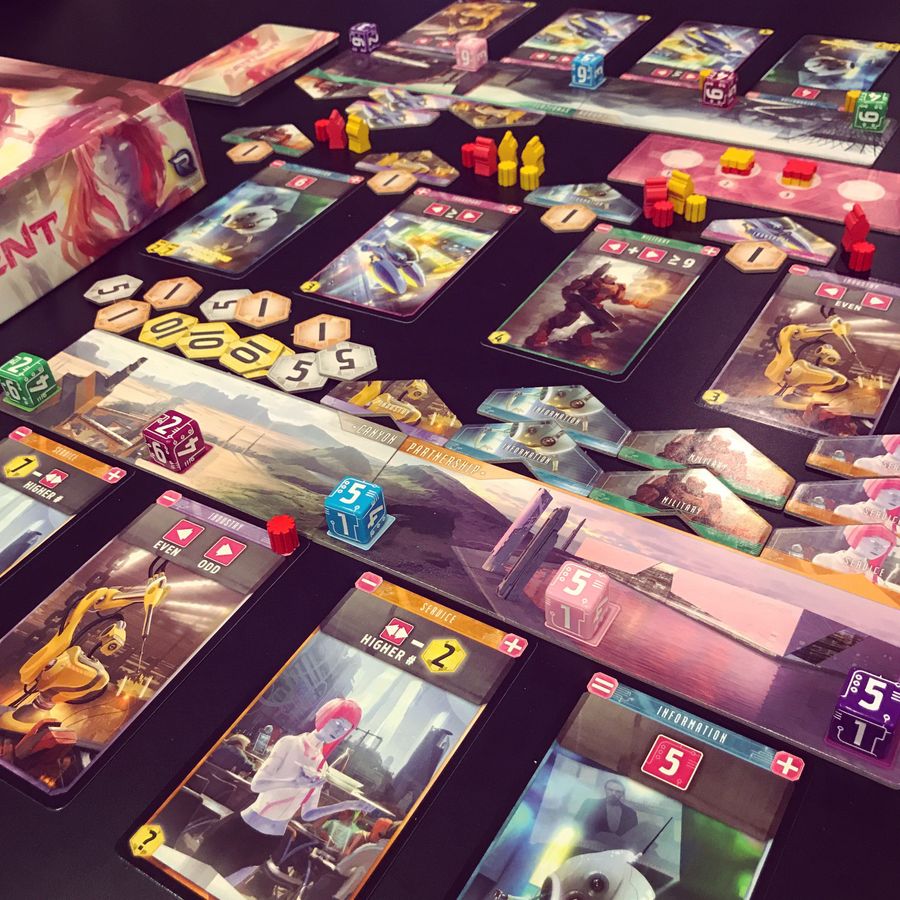 I have this one. It is a keeper and I get it to the table fairly often.

Oh yeah? Cool! Yeah I'm hoping to try it with my wife soon, and that she likes it so we can play it more often!

It is ok with two. i like it better with 3 or 4. The area majority is a more interesting fight at the higher player counts.

I can now confirm that it is better at 3+. Played at 3 last weekend and I agree with your sentiments completely. Still worth it at 2, but it loses a little bit, IMO.

I could see that being true. My friend enjoyed it as much as I did, so I could see us getting it to the table with another friend in the near future as well.

I really liked this one when I played it. It's been 3 or 4 years since I've played it (how long has it even been out? haha), and I've been wanting to play it again since. And yeah, the dice are awesome!

Those are some cool looking dice.

They are very cool!