QE is an auction game where the players are trying to buy sets of auctioned items. The winner is the player with the highest score, but the player who spends the most in the auctions cannot win.

QE follows the general structure of an auction game. The start player draws a stock token from the supply and puts it up for auction as auctioneer. The stock shows a country and an industry. The start player marks a bid on his or her bid board, and displays it to the other players. The other players then mark their bids on their bid boards and give them to the auctioneer, face-down, keeping their bids hidden. The auctioneer views the bids, and announces the winning bidder (but not the amount of the bid). Then the auctioneer marks the bid amount on the back of the stock token, and then gives it to the winning bidder. The bidder keeps the token with the bid amount hidden. The auctioneer role then moves to the next player. Play continues over a set number of rounds, as determined by the number of players.

Players do not have any money — no currency, no balance sheet to track money, and no accounting during the game for player spending. This plays into one of the major keys of the game. QE has no in-game money, and players are not limited in how much they may bid. In the theming of the game, players are governments, and can issue currency at their whim. The only true restriction is that players will be unable to win if they have spent the most when compared to the other players. Also, players can bid ¤0 during an auction, and then get end-game victory points for this bid, once per round.

Game play continues until the sale of the last stock, and players then tally their scores. Players get points for sets of stocks and points for placing a ¤0 bid in a round. Sets include stocks of the player’s own county, sets in the same industry, and sets of diverse industries. High score wins, but the player that spent the most total cannot win.

QE, which is short for “quantitative easing,” is a wild and novel game that has a fresh take on auctions. Most traditional auction game elements are there — item up for bids, players blind-bid following an auctioneer’s opening bid, and players collecting sets of items to maximize points. The twist is that players don’t have a fixed amount of money to spend. The second twist is that players have scant information when considering how much to bid. Players only know what the auctioneer bid, the bid winner, and that the bid winner outbid the other players. I.e., if I bid ¤200 and lose, then I know the winning bidder bid some number over ¤200. As auctioneer, a player views all submitted bids, and gains insight into what players will bid. In the five player game, each player also gets one opportunity during the game to see a winning bid. Players must also note they must also win auctions to win the game. Some of QE is a game of “chicken,” where players determine the right time to put out an outrageous bid to win.

My plays of QE have been very fun. In my first game, I played with five players. I knew that the game has a meta of what the group is thinking and which players are putting out large bids to win an item. I was the second auctioneer, and the first auctioneer put in a single-digit bid for the first item. My first bid was ~¤150. When I won the first bid, and the first auctioneer reminded us that the person who spends the most will lose the game. As second auctioneer, I put the stock up for bid for ¤500, and the other players’ bids raised commensurately. That I had bid high in the first round had less consequence because the other players bid higher.

I lost my first game because I was the player that over-spent, but I love the way in which I lost it. In the third round of the game, one player bid ¤43 billion when I was the auctioneer (see the bid escalation? for a game where the opening bid was less than ¤10). Since I had information about this high bid, I had a theoretical ceiling to which I could bid and I knew that this player would still have spent the most. I drew from this that I would have a “safety cushion” for my bids. But, this is where the wonderful meta-game comes in. I knew that this player is sometimes a wildcard and will go reckless in a game where there is money or accounting involved. This turned was not be one of those times. I lost. I bid beyond ¤44 billion, and at the end of the game, I discovered this player’s winning bids were actually much lower. I lost for having spent the most, and he won because he had the best points from his sets. I had taken the fall as the over-spending player.

All in all, QE is a refreshing take on a game type, and I look forward to playing it more. 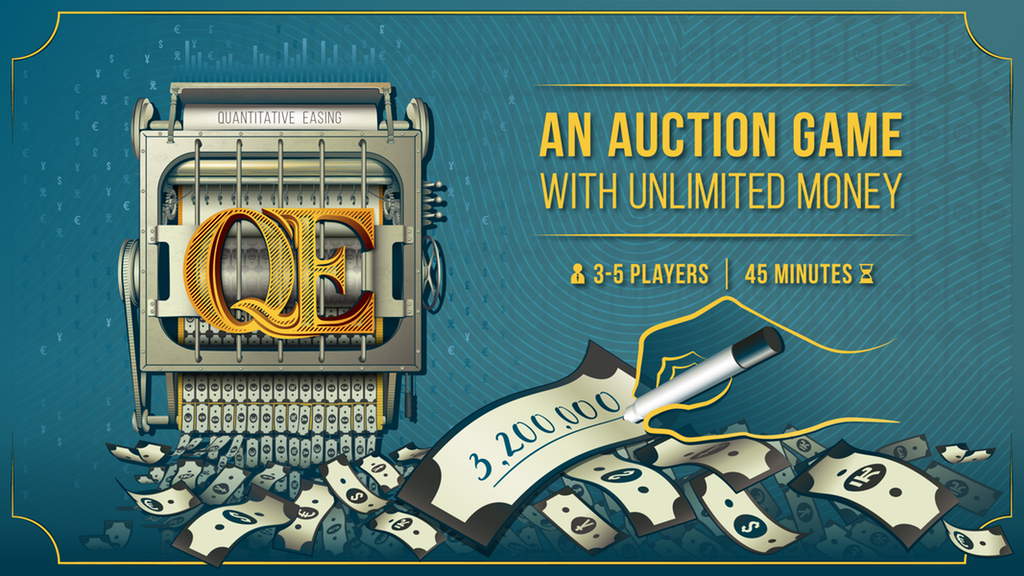 This game concept is so cool! It seems like a win by getting 2nd mechanic with a really cool mechanic where you try and read other players just based on a small bit of known information.