So Star Wars has a grip of games, some have been hits and others are old hidden gems that should stay hidden.

Personally, no star wars game has gripped me enough to want to buy one (sorry). I am not super into skirmish games or games like #Star Wars: Destiny. I want to see more euro-y mechanics tied to the amazing theme of star wars or maybe some deck building. Do you have any desire to see a different kind of Star Wars game come out? If so, what would it be like and what part of the SW universe would it be in?

I want to see a Battle for Mandalore game. Or something obscure like Jedi Training with Kanan Jarrus. Or anything Star Wars is fine by me haha

I love games like #Star Wars: Rebellion, #Star Wars X-Wing, #Star Wars: Destiny, #Star Wars Epic Duels Game, and the like, so I think it's safe to say I'd be down with pretty much any Star Wars game haha

AH those are awesome ideas. I think it would actually be kind of fun and unique for them to do an obscure theme like that, our something to deal with pod racing!

You ever play the Episode 1 Podracer on the N64? That game is awesome. I'd play a board game version of that.

I did! And it was incredible! I actually really want to get it on the Switch!

but I could see that being a cool game, building your racer, making bets, buys parts, multiple races, tuskan raider obstacles (snipers)

We have not one, but TWO copies of Episode 1 Racer for the N64. haha Found one in a dumpster (don't ask) and couldn't see it be thrown away. I'd also love a Switch just for the podracer port.

I think your concept for a podracer game would work really well. Especially the tuskan raider obstacles! That would be a lot of fun. 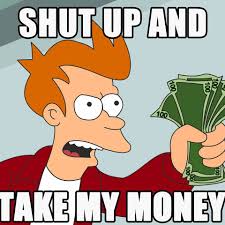 I imagine that would save a lot of people's time lol

We'll be adding in giphy as a feature in the near future, similar to what you'd see in facebook groups/chats :)

it was totally a joke, but that actually sounds amazong and pretty dangerous haha

Epic Duels is awesome. I would love to see them put out a new version with more characters.

Epic Duels is done for, unfortunately. But #Unmatched Game System is, apparently, the restored version, just with different IPs. I have yet to play it, but everyone says it's just as good as Epic Duels.

I actually have never heard of each! but I guess it doesnt matter now! lol

I was excited for Unmatched when I thought it was going to be a straight reskin, but the "improvements" they made turned me off.

That's too bad. I'm mostly disappointed that it's not Star Wars haha

The millenium falcon is one of the fastest, if not the fastest ship in the Star Wars canon. Han Solo brags about how fast he is, and how he has "made a lot of modifications myself."

What if you have a game that is themed around getting the the Falcon to be the fastest ship in the star wars canon. I imagine it would have a bit of engine building/programming, and because of han solo, it would have the potential to push ones luck.

Also, is @Skurvy5 ok? This question has been up for hours. It is about Star Wars and games, and he hasn't weighed in at all.

I think an engine building racer would be awesome, I answered above that something with pod racing would be cool too, plus you have a whole host of characters to choose from that were in the race and in the old 64 game.

Not sure how much I'd enjoy it, but I would deffinitely look into it if something like that pops up

Sorry, wife and I are staying at a Bed&Breakfast right now. So I was off the grid for a bit. I'll definitely answer.

That sounds like a lot of fun.... Hope it was refreshing.

It was fun! But now we are home and the kids are cranky because they missed us and we are tired because we weren't at home. You know how it is.

Yes, yes I do know that feeling all too well.

dont we all lol

How about something like #Die Macher, but set in the Galactic Senate?

#Wings for the Baron, but about building ships for the Empire?

Oh man. I'd love to be a moisture farmer! Competing moisture farmers, buying droids and parts from jawas, paying off the native Tatooiners (i.e. gorfas) so they don't murder you while out on the South Ridge. I am so down.