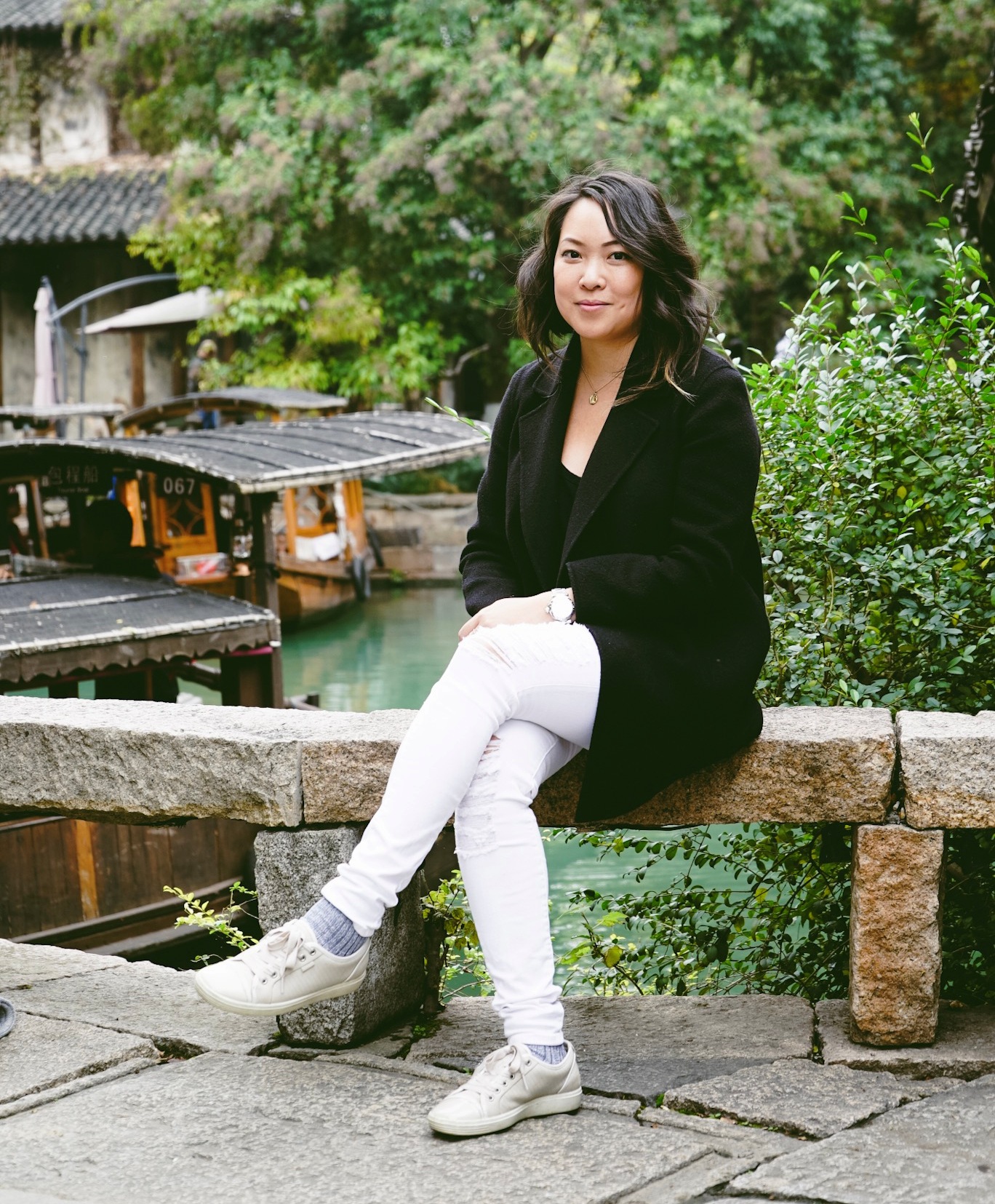 Hey Victoria, thank you for making your time! First up, could you tell us a bit about yourself?

Thanks for having me! I'm an illustrator currently living in Los Angeles. I graduated from Art Center College of Design and then went on to work at Disney Feature Animation for 8 years before transitioning into publishing and freelance work. 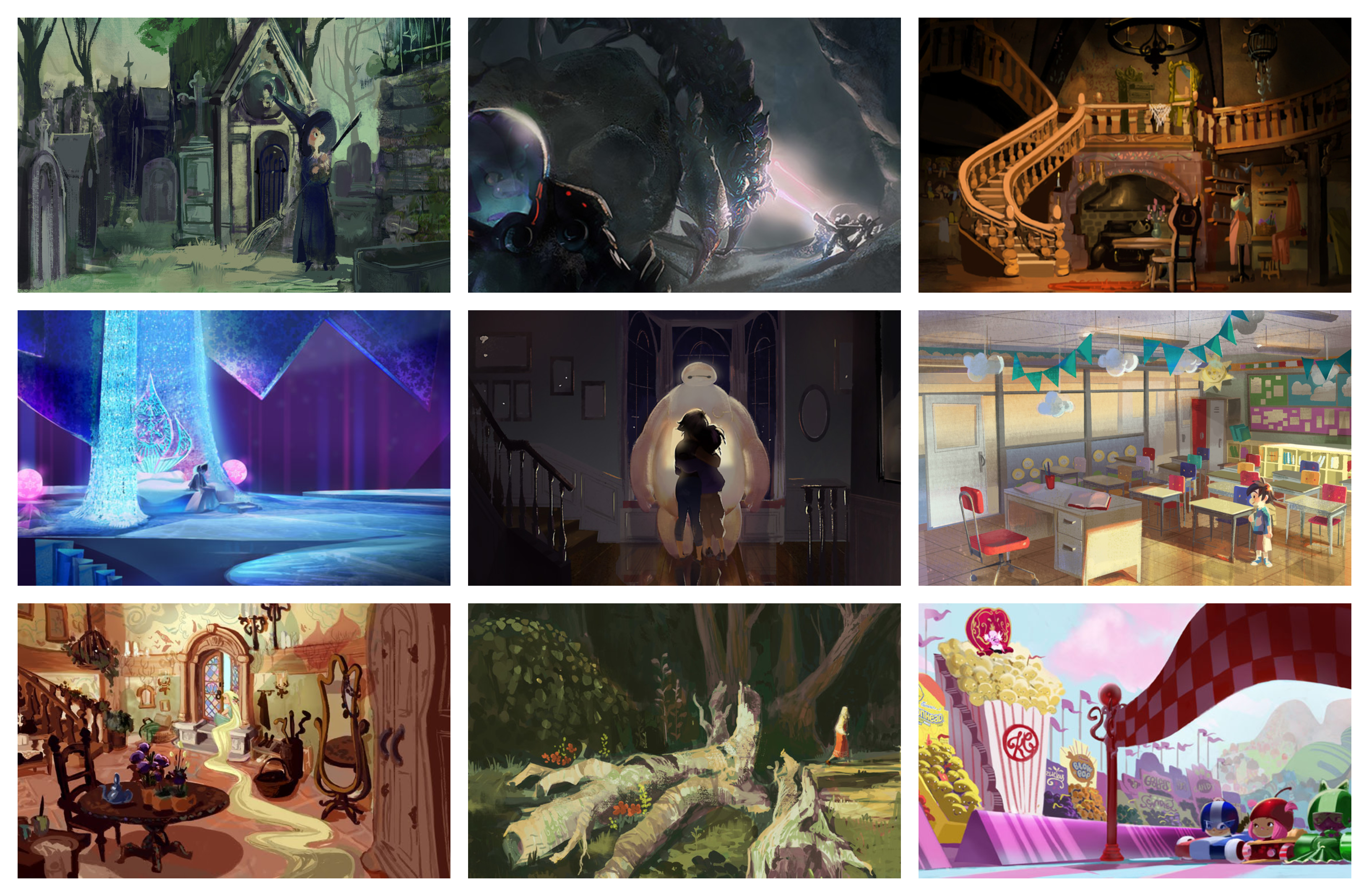 From film to board games, that's quite a leap! So how exactly did you end up working on Bargain Quest?

Bargain Quest was a real dream project for me. My brother and I are both creatives and he came up with a prototype for a game that was really fun and exciting to play. At the time, I had just left the film industry and had time on my hands between client work and volunteered to do the artwork for this project. I was just lucky that my brother is an awesome game designer! 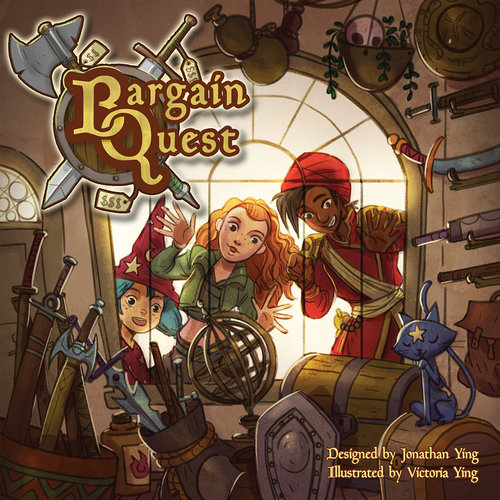 What was the main vision behind Bargain Quest's art that you and your brother wanted to achieve?

We both love traditional fantasy, but we also saw the flaw in it because people like us were rarely represented. We wanted to have an inclusive world where everyone could feel like they belonged and had a part to play. I remember watching my brother play through Ocarina of Time on the N64 when we were kids and the world was just so fun to watch. We wanted to create a family friendly, inclusive version of the fantasy worlds we grew up loving. 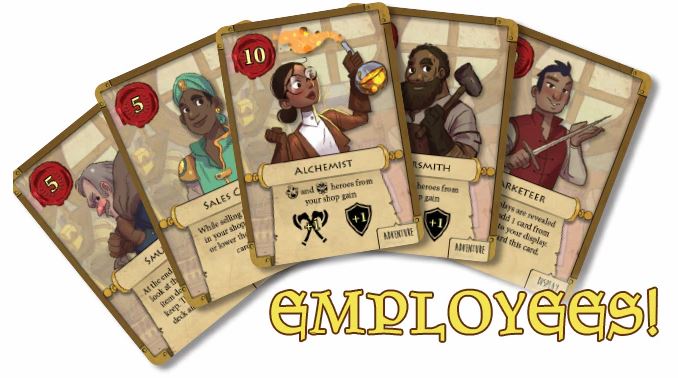 How did you go about deciding what kind of art style/mood would be the most appropriate?

Since we were aiming for fun above all else, we tried not to stick too strictly to any specific fantasy world. Jon is great at thinking of cultural influences for each of the heroes so he would throw me ideas and I would sketch them out. We were on the same page most of the time for the artwork, so he turned out to be one of my easiest clients. Plus it helped that we still had the sibling-factor, so I could voice my opinions without feeling like I was overstepping the director.

One of the many things I like about Bargain Quest's art is the personality behind not just the characters, but also in the shops and the items. Could you share some tips on how you achieve this?

Jon was a big help on a lot of the items, there were so many to design that splitting it between us helped a lot. I would take cues from what he was doing to insert them into my own items. I'm not as much of a gamer as my brother, so he was able to show me more inspiration that I wouldn't have gotten otherwise.

References to classic RPG elements always bring up great childhood memories. Are there any games you played before that helped with inspiration?

I mentioned Zelda earlier, and that was huge for us, and for me, literature and books that took place in fantasy always held my interest. I loved the Earthsea novels, The Chronicles of Narnia, and all the Harry Potter books. They all had a huge influence on this project.

Among all of your character, shop, and item illustrations, which was your favorite? And which of the characters do you most identify yourself with?

I did a little witch girl in the first deck and she's my favorite. I always loved witches because they were a power fantasy that always included girls and women. She's cheerful and sweet like Kiki from Kiki's Delivery Service! I also love the witch shop that's included in the new expansion for the same reasons. I like to think that that would be mine if I lived in that world. 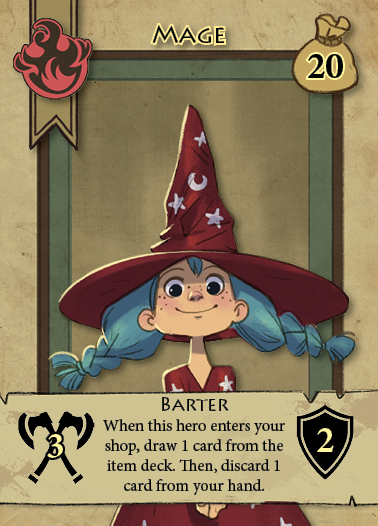 What was a unique aspect of illustrating for board games that you liked? Was there anything you didn't like or found challenging?

Board games have a LOT of art, and that's both a good thing and a bad thing. The breadth of the characters we were able to put in the game is one of my favorite things. When I play Bargain Quest, I notice that people start to make up their own lore for the characters and the employees which always makes me smile. The downside of there being a lot of art is that THERE IS A LOT OF ART. It was fun to do, but also daunting in terms of its scope. There were times when I had to get help with certain elements of the art, like getting help with flatting or props.

As someone who seems to challenge new territories again and again (children's book, film, comics, board game, etc), what are some advice you could give to artists out there who may be afraid of taking that first step?

You're good enough. The thing that holds us back from trying to do new things is usually the feeling that we aren't 'ready' enough to do or make them. When you're trying to work for a publisher or a studio, that may be the case, but you have to start producing the work before anyone will notice you. If you like comics, make indie comics, if you like concept art, make concept art. Don't wait until you're good enough, you're already ready.

Lastly, what's something new you'd like to explore in the future?

With comics I've been dipping my toe more into prose writing and screenwriting. If I ever return to film/TV, I think I would love to be a writer. Someday, I would also like to write a prose novel, like some of my favorites from my childhood. Great interview its nice to hear the behind the scenes part of things. I also really like the room and background art.

Love the insights. I backed the second Kickstarter for Bargain Quest and I'm eagerly waiting for the game to fullfil. I must say, the art is one of the reasons I backed the game in the first place.

It was great time getting to know her and I was amazed by how successful she is in so many different areas. Her willingness to try new things is really inspiring :D

Hearing from her made me want to get Bargain Quest too

What a great interview! I've always had a mild interest in this game but now it's definitely shot up to the top of my wishlist. Keep the interviews coming.

I have an upcoming interview with Artem Safarov, the designer behind #Unbroken! He's making a comeback through a game themed around redemption :)

Oh cool! I've always been pretty interested in that game myself.

Oooh, I love the shop designs in Bargain Quest!! I was immediately drawn to it when I tried out the game with my friends. I absolutely love how distinct and unique each of them were, though my favorite is probably the witchy/occulty one. I only played it once, so I didn't get a chance to see all the characters though.

So much thought goes into board game art. Its insane!

There are around 10 more in the works :)
2
Linked Games