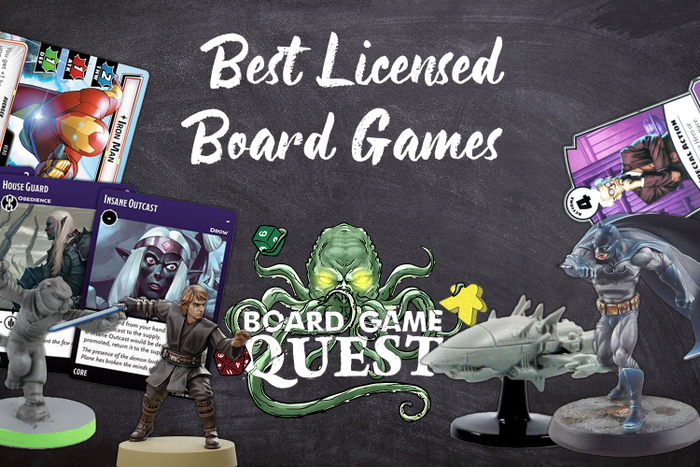 I'm going to plug BGG's 4,489th ranked game for one of the best-but-overlooked licensed games: #Disney: The Haunted Mansion - Call of the Spirits Game. I wasn't expecting much when I bought it last October, just hoping to interest my teenage son into playing a game with the rest of us because he loves the ride this is based on.  Not only was I pleasently surprised, but he'll play it when we put it on the table-even playing the ride soundtrack on his portable speaker while we play.  It's a really good game, scales well for it's 2-6 players, and nails the theme.  The hitchhiking ghosts are just awesome!

Most of the times we've played it, half of those playing have been non-gamers and they have really liked it.  It's got card collection for points, limited turns per round so you have to figure out how to make the most of those three turns, you can attempt to steal another player's card to increase your points if you're willing to pay an unknown but limited penalty, and the 'final round' is shuffled among the last three event cards creating some uncertainty about exactly how many chances you have to gain the ghost cards you need.  I'd even say it's a good entry game to the hobby.

I really enjoy Middle Earth Quest. Out of print, difficult to find and usually expensive. All in all, a fantastic game, much better than the new app-bound game.

Besides, we never enjoyed PVE games. No matter how involved the IA is, it will never achieve the cunning and stupidity of human adversaries.

Of course, having a licensed game list without mentioning Battlestar Galactica is anathema. One of the best marriages of theme and mechanics ever.

Is it weird that I had no idea #Horrified was licensed? Granted I never played it so maybe that gives me an out? Sort of? Lol