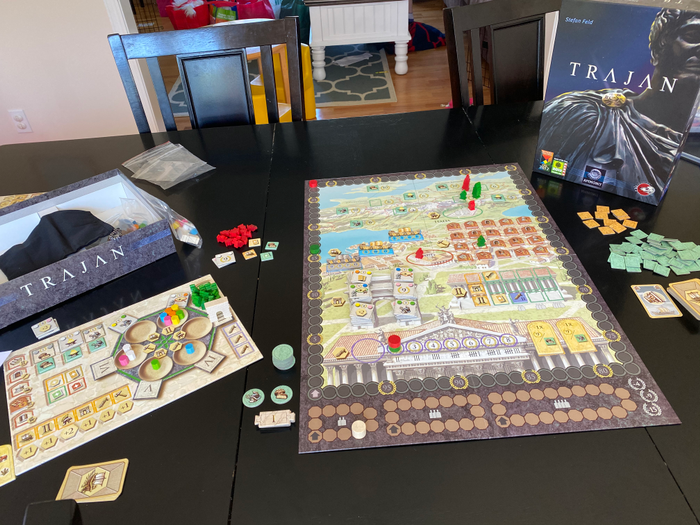 I’ve now got a couple of solo plays of #Trajan under my belt now so I thought I would go ahead and write up my thoughts on the game in a Brian’s Battery format.

#Trajan is a game by designer Stefan Feld in which players assume the role of Roman leaders striving to fulfill the wishes and demands of the Roman people.

The best way to describe this game is to consider it almost like 7 different small euro games all combined into one big euro game. Like most euros the end goal is to have the most victory points at the end of the game.

Players earn victory points by accomplishing different deeds for the people of Rome. Building new buildings in Rome earns points, as does earning votes in the Senate. Marching your legions through Gaul demonstrates your military might and earns you the respect of the people. Shipping goods from the port of Ostia to other parts of the Empire also earns you points.

How you accomplish these actions brings us to one of the most unique parts of #Trajan. Instead of worker placement, action selection, or card play, #Trajan utilities a rather ingenious “action bowl” mechanism. This mechanism is similar in feel to the classic game #Mancala.

Players choose one bowl, grab all of the action markers from that bowl, and drop one marker off at each subsequent bowl in the circle until they drop their last marker. The bowl that receives the last marker will be activated and the player performs that action. This leads to some really interesting decisions as you attempt to plan out your turns.

Another of my favorite mechanisms from this “action bowl” system is how it relates to the round and game progression. If the bowl you draw from contains 3 action markers, you must also move the time tracker 3 spaces forward. The time tracker represents one “month”in the game “year” that you are playing. Every time the marker passes the start position another month has passed. The game ends after one “year” has passed.

I played the game using an unofficial solo variant. Despite being unofficial, I thought that the system worked incredibly well. The AI is card based and presents a real challenge. I have yet to defeat the AI.

So that’s a rough overview of the game. Let’s get into the grades now.

(+) The art in this game is good. It’s not great. It’s not awful. It’s good. It definitely makes me feel like I’m playing a Roman themed game. The art on the player boards is really nice. The little bowls actually look like they have indentations. The graphic design is clear throughout the game. There isn’t much symbology used in the game, but what is present is easily understood.

(+) The rule book is good. It’s not great. It’s not awful. It’s relatively well-written with decent examples to help you learn how the game plays.

(-) The theme in this game is barely there. I love Roman history and I wish that this game had more to do with history.  I suppose with most euro games like this, however, you kind of take what you can get for theme.

(+) The components in this game are actually pretty good. The player boards and main board are nice, thick cardboard. The tokens are all well-made. The wooden action markers and meeples are quite nice. The drawstring bag provided is also quite good. The cards are typical euro game quality. They definitely aren’t Fantasy Flight level, but they are good.

(+) It feels like at first that there are way too many systems all squished together in this game for it to work - but as you play the game it actually starts to make sense. Trying to focus on one specific strategy takes real planning and forethought due to the way the action bowls work. This makes for really interesting gameplay.

(++) The action bowl system is unique and I love it. I love how the number of markers you move relates to how much time passes in the game. I love trying to plan out my moves and puzzling out what I should do next. It makes the game quite challenging and exciting.

(+) The solo variant is hard! The AI player is relentless and the games I have played aren’t even close. This is good because it gives me something to work towards.

Overall, this game is good. I enjoy the unique mechanisms but wish that it had a bit more Roman theme. As a solo game it is very challenging. I can definitely see how this game is considered a classic.

When I first looked into this game, I was caught off guard by how different the feel of the cover is from what's inside. I'm sure I'd have fun with this one though. Do you see yourself playing this often?

I agree with your evaluation. The mechanisms are really cool and unique, the strategy is hard to grasp until it clicks, and the theme is not really present...BUT the full package is a fun game!

Good to hear the solo variant feels good. I need to try it out sometime soon.

After #The Castles of Burgundy I feel scared to try another Feld. I would like to give this one a shot though.

All Felds follow a similar formula, Small actions that lead to big pay offs and chaining actions. If that is what you did not like about Castles then Feld may not be your guy.

I had several problems with COB.

In the end, I think I would characterize it by saying that it felt like a 2 or 3 hour roll and write.

I see your issues with it. You definitely are doing the same thing from the start of the game to the end, but there are tiles that can really improve your city and make your moves more impactful. If you do not get those, then yes the game can be pretty samey. And if Point Salads are not your thing...Feld is definitely not your thing lolol.

I feel with COB it is so close up being a engine builder, but it doesn't quite pull out off.

I dunno, I have never gone into that game thinking it is an engine builder. I think of it like I am chipping away at a slab of marble like a sculptor and at the end of the game I have a finished product. There is a small layer of engine building and synchronization with the tiles but if you expected an engine builder and played this you are bound to be disappointed.

I didn't expect it to be a engine builder, but it definitely does have a few engine building elements.

I think I like your sculptor analogy. I much prefer spending a equal or greater amount of time setting up a big turn, than taking that turn. I love that. But a sculptor doesn't do that. The chips of marble slowly but steadily accumulate like the points in COB. There is no option for big turns, it is just slow, steady, incremental change. I really can see how people like that, but I really don't.

That makes sense to me, games can make you feel a sense of power and accomplishment so I understand why you would crave that in a game or an action!

I wasn't a big fan of Castles of Burgundy, but I really like Trajan.

This is the only Feld that I’ve played. Can’t comment on CoB.