Merry Christmas everyone! Please share pictures or stories of your board gaming moments from today! And may all of you have a blessed and wonderful Christmas with your loved ones!

Here is the haul from my morning! About half is to play with the kiddos but still very excited! 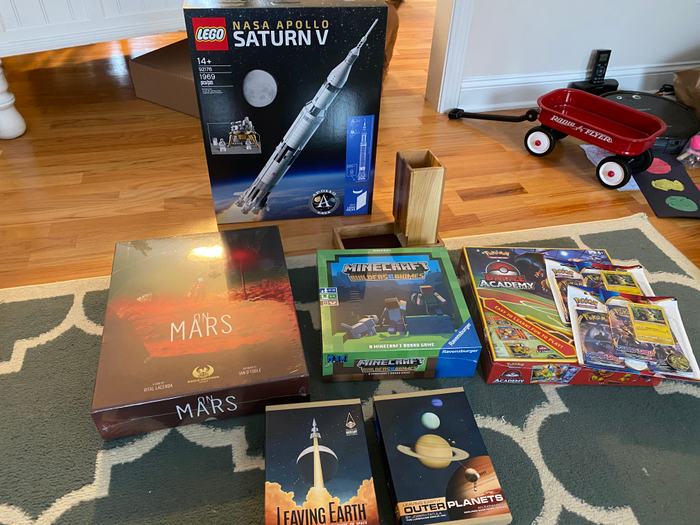 That Saturn V rocket set is awesome. A friend of mine has it and it is massive, haha

Oh wow you went all out on the space theme, love it! Merry christmas!

I a, very curiousa out the minecraft game!  When you get it to the table I would love to hear your thoughts on it.

Same here @Skurvy5! My brother in law and sister in law are super into Minecraft so I'd love to see what that's all about

We played it this afternoon! It's surprisingly fun.

Very nice, were they surprises or did you buy them?

I picked out the ones for the kids. And I was aware  of the games for me.

Nice, looking forward to hearing about #On Mars

I am as well, I do sense some interesting reviews coming down the pipe.

For sure, everyone got some pretty cool games! 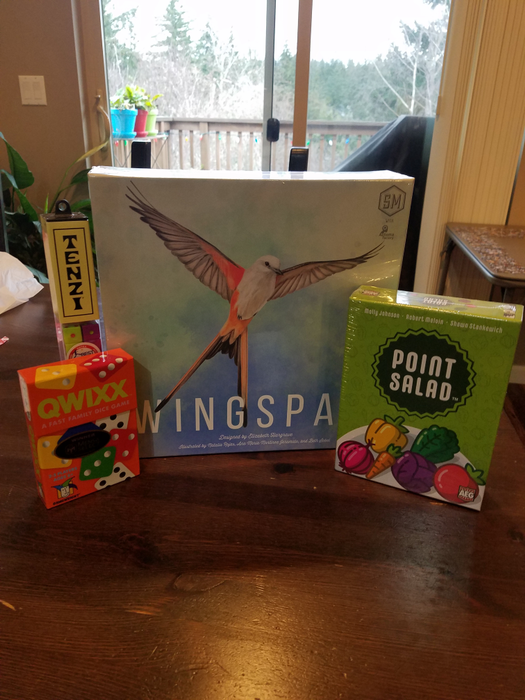 #Tenzi?? I have never heard of that game. Do you like it? would it be a good family game for me to look into?

I haven't played it and don't know much about it.  My wife played it at her parents house this summer and enjoyed it.  Once we play it, I'll reply with an update.

@Marshwiggle92 We played #Tenzi tonight with some friends over. It's a simple game, really-first one to roll all ten of their dice to the same number yells 'Tenzi' and wins.  The included sheet lists some simple variations to the game, and I have seen something like '77 ways to play Tenzi' at one of my local game stores. The game comes with four sets of ten dice. You can buy multiple sets or any set of 10 to add more players.

It's simple, it can be loud (my game mat cut down on the clatter of the dice on the table and prevented them from rolling/sliding all over the table), it's a game of chance, and you can laugh about it.  To me, it's a filler game-good for about 15 minutes.

Personally, I prefer a dice game called Flash-The Lightning Fast Game! It can be played by two to six players, each with their own colored dice, and eight different objectives.  You choose which objective you all are going for, and the first person to roll that objective takes the '1' tile from the center of the table.  All other players then grab for the remaining numbered tiles. After all objectives are played, the person with the lowest point total wins.

Here's a link to the game on Amazon:

Ah, Gotcha. It doesn't sound like a "great" game. But, I can see quite a few situations where it could be sorta fun.

I would agree with that description.

That wingspan box is striking. It never fails to catch my eye.

I agree.  And I've heard how well done the components are, but it still caught me by surprise when I unboxed it! And I'd love to see more publishers print a repacking diagram on the side of the bottom box! I didn't notice it until I did an online search on how to repack it.

Have you gotten Wingspan to the table yet? What did the family think?

Uh, no. Although my wife did say she'd like to try it when I opened it! Games were not the priority yesterday for the family.  It'll be a few weeks before I can get it to the table (going to Vegas tomorrow morning).  I'll try to remember to answer your question when we finally get to play it! 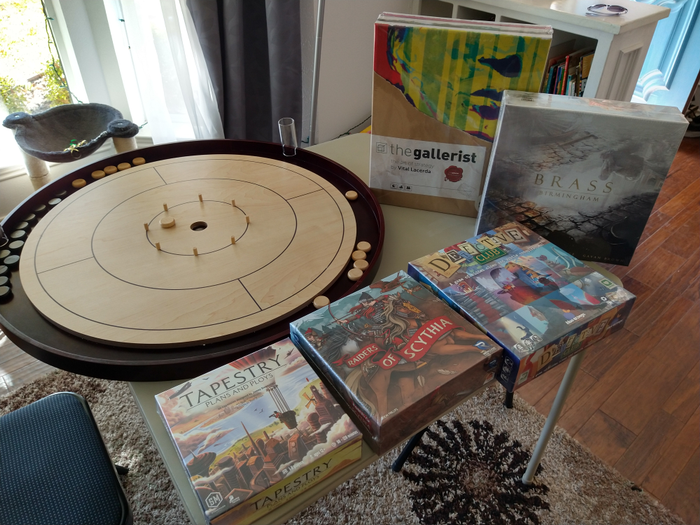 We played an 8 player game of Detective Club and I think Raiders will get played today. Crokinole has been played a ton and the family loves it. Lots of food and movies 😊

Now, that is a great haul. That Crokinole board has me drooling a bit.

Are all of them new additions? 😮

Looks like a great haul! Sure matches my preferences too haha. Have you played #Raiders of the North Sea?

These are all new for our family. I have played Raiders of the North Sea. I enjoyed it with an expansion but definitely like Raiders of Scythia more. I think I might like Scythia over Paladins and Viscounts even!

Only one play through though..so I'll have to see after several playthroughs and a few solos.