Too Many Bones: Undertow First Impressions 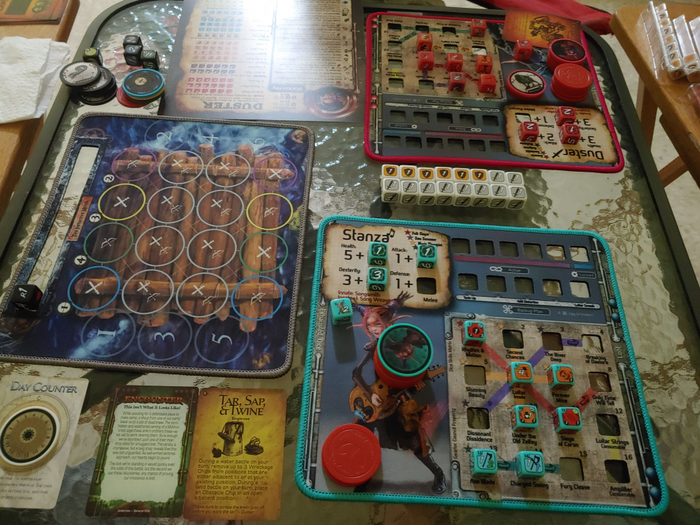 After a few days of getting comfortable with the rules, a short solo session and a lot of patience to wait for the right time to play with my partner I finally played a session of #Too Many Bones: Undertow. We chose to go against the recommended tyrant for our first session and not the entire campaign. Setup is fine here since all baddie types are used for this tyrant and honestly I didn't mind since the components are great to handle.

The actual playthrough was amazing. I played as Stanza and my partner as Duster. The game offers a couple of days of light encounters to buff up your character so you're better prepared further down the line. The writing on the encounters was very good with lots of lighthearted and funny moments. I do wish there was a stronger story from day to day but obviously the random encounters can't offer that.

To defeat our tyrant we needed about 5 succesful encounters, we did 6. I'd say we had about 4-5 battles and half were fairly straightforward but the other half were very hard. The interactions with all the baddie abilities and your skill dice make the battle a super cool puzzle to solve. Some abilities are devastating to certain characters as I found 'Mischief' to be horrible against Stanza, basically stopping her from playing songs which is her main thing. That fight I had to rely on Duster and her wolf to take out all the mischief baddies.

As for the Tyrant battle itself, I'd have to say I was a bit dissappointed it was pretty easy but I suspect thats by design as its the Tyrant used for teaching the game. Eitherway the specific abilities of Barnacle were pretty cool and in the end we rid Daelore of him which is what matters.

One last thing I'd like to mention is I did find lots of ambiguities in rules and interactions between abilities. This is the main reason I took a few days to actually play, I didn't want the playthrough to bog down with me checking rules and forum answers all the time. Sadly I still did since there's lots of clarifications needed from Gearloc abilities to movement to dice management. I've played other games like #Star Wars Armada where the rules are specifically designed as to have the least amount of ambiguity and it shows, FAQS are usually only needed to detail some interactions with newly released expansions etc.

Anyway, we had a blast with the game, from incredible battles to great character progression to insanely high quality components. Honestly a few years ago when I first saw TMB components and price tag for the first time, I was skeptical but now I'm all in (maybe a Gearloc or two more lol). I'm not sure how to go back to regular card board components now haha.

Heck yes! I love seeing you have a positive experience as well! I have seen that the biggest complaint for people is there is some abiguity with the rules but I think for the majority of the game the rules are fairly straight forward, it is mostly on those one off random situations that make it a little more complicated or convoluted.

I agree, the rules shouldn't be a barrier to entry. Even the structure of the game is actually quite simple with just an encounter phase (the meat of the game) and a recovery phase with a few options.

Yes, the basic rules are easy, the complexity comes from how the baddies react and the skills your gearloc can learn. I like that they provide a beginner strategy guide too. Makes it more approachable.

First the awesome pictures from Neal and now from you! haha

Glad it went well and looks like it was inevitable for you to get into more content. What's the main difference between Undertow and the original by the way? All I know is that it's a little less content and that it's more affordable.

Thanks! Forgot to mention it above but oddly enough there's some particular bad lighting here because we played saturday afternoon while there was a big storm passing through the island lol. Perfect time to play a long game if theres a chance of the lights going out.

Apart from the gearlocs which some people say are more unique in undertow, the main difference is the battle mat has more spaces in undertow (you can compare Neal's and my picture) to accomodate 2 new types of badies : mechs and fish. The fish or water type baddies only appear on encounters in the raft (pictured), land encounters use mechs and the other side of the mat.

Another thing to consider is expansions are actually tailored made for either the main box or Undertow, not both. So while you can mix and match there will be some slight inconsistencies in encounters, story wise.

Ohhh gotcha. Man, after looking through Chip Theory Games' page for Too Many Bones, it makes me wonder how far down the rabbit hole I'd go in the future haha. Stanza sounds cool and I'm sure I'd end up buying additional characters after multiple plays of the base game. Also, I wonder how close a Trove Chest is from you and @nealkfrank's future xD

Haha I am very far away from a Trove Chest. At this point, the most appealing expansion is Age of Tyranny and maybe another Gearloc...maybe the premium health chips...its a deep rabbit hole lol.

Is there a particular Gearloc you were thinking of? :D

I really like Nugget and Ghillie, I like the ranged Gearlocs, they often have the coolest skill dice!

The Trove Chest is insane! I love it but its pushing the limits haha. I'd have to have everything else to even remotely consider.

I can't imagine myself getting the Trove Chest either haha. I was surprised to see how expensive it is but after seeing a video frmo Chip Theory Games on its development, I was impressed by their attention to detail.

From what I've read, Stanza and Nugget sound the most interesting to me!

So glad it worked well for you.