I thought I would compare the 5 games I own where deck building is the main mechanic to show some of the different flavours and interesting takes that are out there.  I am excluding deck construction games.  (So #Marvel Champions: The Card Game isn't in here.)

I've written this assuming you know the basics of deck building so I can just highlight the interesting nuances.

#Hero Realms: The most basic deck builder of the bunch.  The fantasy version of #Star Realms.

In this game you are building a deck from a shared pool of cards that will then be used to directly attack your opponent and their cards. Typically in deck builders the cards interact indirectly with your opponent or not at all.

It takes the game play of #Magic: The Gathering but in a deck building rather than deck construction style.  This is a fun game to pop out for a quick game of in your face action.

#Clank! In! Space!: The Clank games are my favourite style of deck builder.

I love deck builders that manipulate things on a shared board but the thing that really sets this apart from the other games is the concept of Clank!.

Certain cards and actions add one of your coloured cubes to a bag.  Every so often the game will have the players pull a certain number of cubes from a bag and if your cube is pulled you take damage.

Clank!  The games that hit back!

#Trains: Another deck builder that manipulates a shared board, and also has different sets of cards that can be played every game.

The real nuance for this game is the concept of waste.  Many actions in this game will require you to take a waste card which clogs up your deck.  It is completely unavoidable short of basically not playing the game.  Depending on the cards in the game you might be able to get rid of that waste but if you get a hand with a lot of waste you can discard it all and skip your turn.

It's an interesting take on "deck thinning" which I enjoy along with the play on the board and the many, many different card sets you can play with.

#Arctic Scavengers: Base Game + HQ + Recon: This game has a really good theme along with many different card sets you can play with.

It also has two nuances to it that makes it a bit different from other games.

The first one is that you can take several different actions on your turn but you can only do each ONCE.  So you can play cards to draw cards but you must play all of the card draw cards then and there.  You can scavenge the junk pile for a card but again, you have to commit all the cards you are going to commit to that action.

The second one is that at the end of every round (except the first couple) there will be a combat for a contested resource that is more powerful than the cards you can typically buy or worth more points than other cards.  This combat plays out with all of the cards you didn't play during your action phase.  Cards can be sniped, weapons can be used, and wins can be stolen by someone less powerful.

It's a delightful mix of in your face action and bluffing.

#Vikings Raid & Conquer Game: Probably the lesser known of the games.  I played it first at SHUX having never watched the TV show.  (Still haven't.).  I often shy away from IP based games but this one grabbed my attention.

The nuance to this game is that at the beginning of the round you decide if you are going to raid for a victory point card on your own, in a group, raid another player, or defend yourself.  After everyone has played their cards they then take that action using whatever cards they managed to play.

Raiding another player allows you to take their point cards or cards from their deck!  Raid for victory points solo can be hard to get good cards but in a group is chancy because the leader of the group gets the card and the leader is whoever has the most leadership points played that turn.  It might not be you!

So do you decide to go on a raid hoping that your card draw gets you some powerful attack cards?  Do you go raiding for a victory point card but you know that other player likes to raid the leader?

I really enjoy the deck building mechanic and these 5 games while very similar have interesting nuances and takes on the genre.

Hopefully this was interesting.  :)

I still have a self published copy of #Arctic Scavengers . I did get rid of the very flimsy box. I played with Gabhart at GenCon the day he signed with Rio Grande. I really dig it though it can have a runaway leader issue.

#Valley of the Kings and its sequels are an interesting take on deckbuilding with only cards entombed score. The pyramid is the market, with only the bottom available. Good play is a balance of keeping and ridding your deck of good cards.

#The Taverns of Tiefenthal is really cool, and the least pure deckbuilder. Your deck is only a small part of your play, and it's rolled off the top. You have tavern upgrades to buy in addition, and there's dice rolling and drafting as well in the mix.

I’ll have to check out those other two!  The burying cards score mechanism is in the Vikings game as well and it is a nice twist to the genre.

I keep on thinking about picking up #Trains. I hear that it is basically #Dominion with a board, and I love Dominion.

Dominion with a board is more or less accurate. The waste aspect is different and the board changes it quite a bit. Where other players put their lines and stations will impact your plans and the type of hand you want.  It also turns it in to a race.

Thanks for the write-up! #Arctic Scavengers: Base Game + HQ + Recon has been on my radar ever since I got into the hobby 4 years ago.  Every once in a while I get the urge to look into it again.  How would you rate that one?

I also really like deck-building as a mechanic, not as a complete game.  So games like #Dominion or #Ascension: Deckbuilding Game don't interest me very much.  Even #Star Realms got old pretty quickly for me.

Have you heard of #Path of Light and Shadow? It's an interesting take on deck building mixed with area control and a tech tree.  You don't get to choose your cards directly (though you do have some influence over what kind of cards you get).  The main point of the game is to cultivate your deck to work for your strategy.  I do wish the component quality was a little better, but it's a solid game.

I have the least experience with Arctic Scavengers.  I can tell you that the solo experience is really poor.  Some of the solo variants you can find online are ok but not great to me.  Unfortunately I have only been able to play it solo so far.  But I expected that.  This game needs the player interaction

The good news is that I might be getting a game in online with my friends later this week. I will try to remember to give you a heads up and rank it then.

I agree that I prefer deck building to be the mechanic. But every once in a while it’s fun to pop out hero realms for a quick straightforward game.

I have heard of Path of Light and Shadow but I don’t know a lot about it.  I’ll have to check it out further! 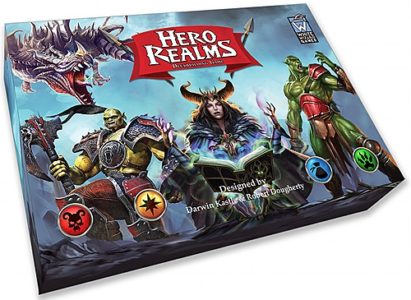 Topical posts that relate the genre of "deck building".