After two multiplayer playthroughs and three solo games I feel like I have a nice feel for the overall game (though not a great strategy as of yet!).  The board looks fairly complex but gameplay is not very difficult to teach and the game goes fairly fast.  60-90 minutes is a fair playthrough time for new players and if experienced players are taking reasonably quick turns I think 45 minutes is quite possible.  There are three types of tailor a player might play on their turn: Master, Journeyman, Apprentice.

I played the solo games with the Jewerly expansion.  The loan card to the left is an apprentice that I could potentially obtain if I meet the requirements on the card and decide to hire a new employee.  At the start of each round players decide which three cards from their 'staff' to use this turn.  Unused staff remain on the left, 'draw' side of the player board. As players use staff to take turns the staff are discarded to the right of the playerboard or deputed and removed from the game.

Journeymen cannot hire staff, tailor master garments, or place garments onto master spaces on the board.  Their bonus actions are not as good as apprentices but better than masters.

Apprentices cannot obtain the queen's favor, tailor garments, or hire staff.  They may purchase a decoration, be deputed, or obtain materials and have the best bonus actions in generally.

Each turn, players discard an avaialble employee and can take one of six main actions and the employees bonus action (in either order).

When hiring (only masters can hire) players immediately add the new staff to their hand for this round (thus adding an extra turn).  The number of available employees determines cost 4/3/2/1 = $5/$3/$1/$0 (Players start the game with $15 Livre)

There are three 'drawers' or materials and each drawer has three material tiles.  When playing an employee to select a tile players either keep the tile for the color of material on the tile (some combo of blue (common) pink (common), green (uncommon), or orange (rare)) or discard the tile to obtain some amount of lace and/or thread if it appears on the tile.  The cost is determined again but the amount available in the given drawer 3/2/1 = $2/$1/$0.

Tailoring a garment can only be done by a master or journeyman and there are 9 available garments at the start of each round with decending costs from $8 livre to $0. The two $0 spots are discarded at the end of the round, all garments slide right, new one fill in the empty slots.  (Materials are only filled if they are purchased).  Pay for the garment selected, discard the materials required, and either sell immediately or place on the board for end game scoring.

With the jewerly expansion, you may additionally purchase a necklace or ring for your dress/coat respectively.  Each jewerly piece will give you +$1 during income (normally $5). If the color of jewerly matches the garment players draw a random material tile from the materials bag.

Decorations are variable.  At the top of the board are multiplier decorations (only 5 spots) costing from $12 - $22 with the $22 slot being the only 3x mulitplier (the other are 2x) and during end game scoring will allow each player who purchased one to mulitply the point value of 1 garment/decoration.

The statues in the board center can award up to 9 points based on placed garments.  The decoration in the kitchen ad to a players income during income at the end of each round.

The musician decorations in each hall give a small point value at the games end and all the player to be represented in the given hall (there are 5) even if they don;t have a garment in the hall.

Deputing an employee removes it from the game and give the player $ based on the level (master/journeyman/apprentice).

Gaining the Queen's favor will award 3 prestige points (aka victory points) and the end of the round and immediately provide $5 livre.

The game is engaging as a multiplayer and while there may be a little bit of 'gotcha' due to purchasing a garment or taking a place in one of the halls it generally feels lighthearted and would only feel aggressive if the players made it that way.  The decisions of which staff to choose each round, who to hire, which bonus actions to try and use the most, and obtaining the funds to purchase decorations quickly or later on in the game are well balanced and keeps the game interesting across multiple plays.

My daughter (12) enjoyed this game asked to play again.  The solo seems to play well and is reasonable challenging to defeat.  The jewerly expansion comes with the deluxe version of the game and offers just enough variety to be worth playing with.  The theme is unique and the art is fantastic (Ian O'Toole).

We drank beer and ate cheese during one of the multiplayer playthroughs but tea and crumpets would have been just as good and having a good pinky finger extention and curl will not hurt your chances playing this game.  I still need a few more plays under my belt but it ranks high with me at the moment.  Not sure if it makes my top 10...I'll have to see how things go after the holidays and adding new games and redo my top 10 in January.

Once it's finished uploading I'll link my solo playthrough :) 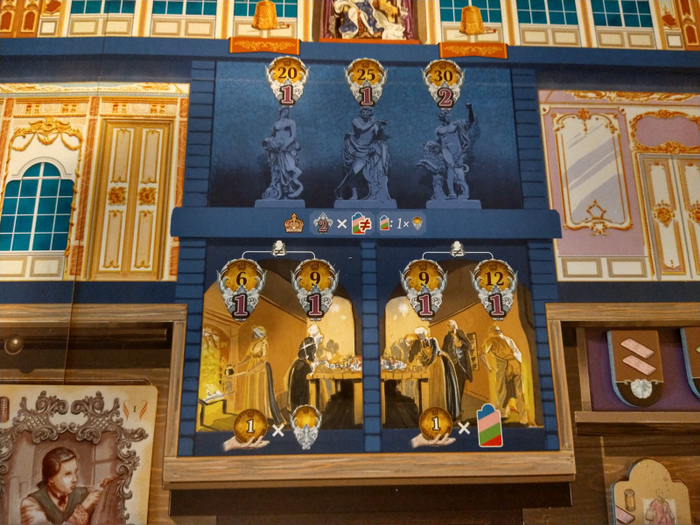 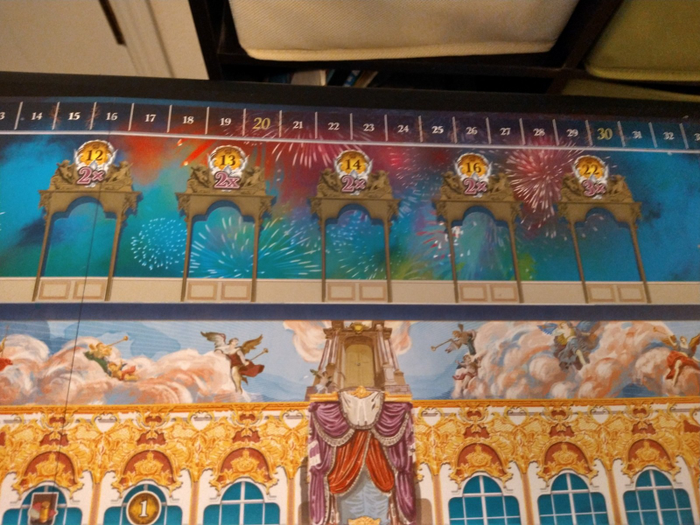 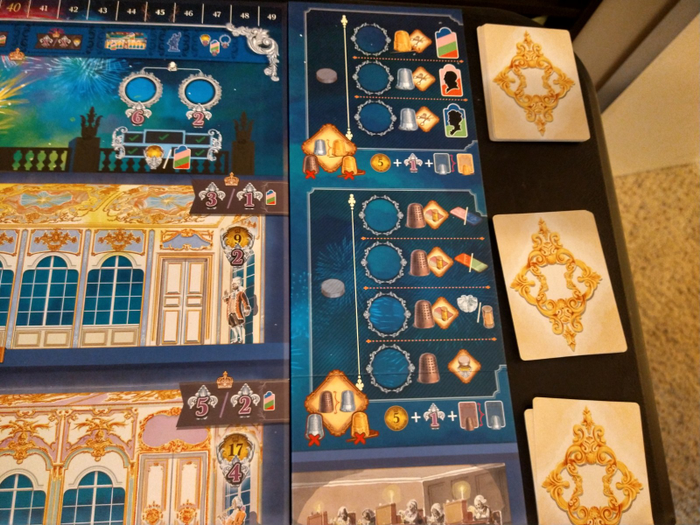 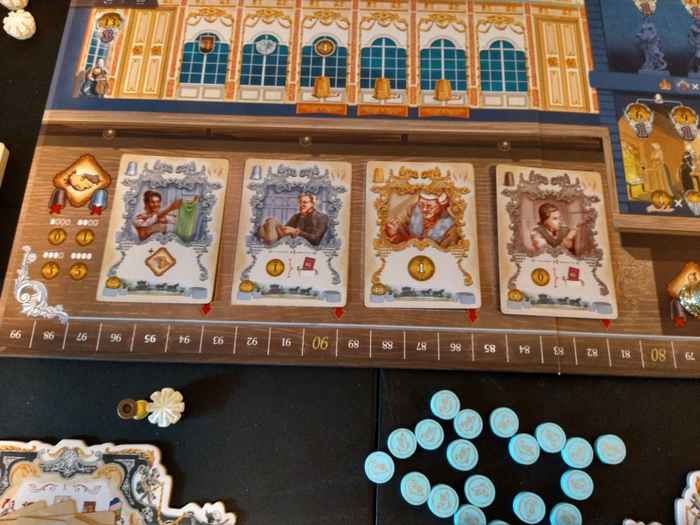 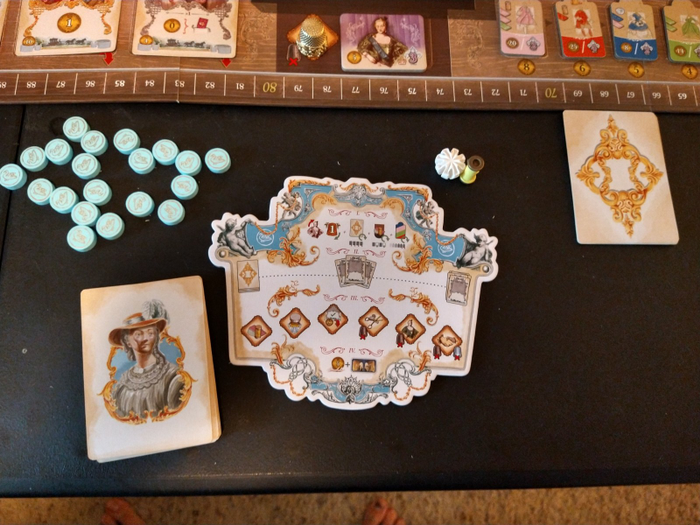 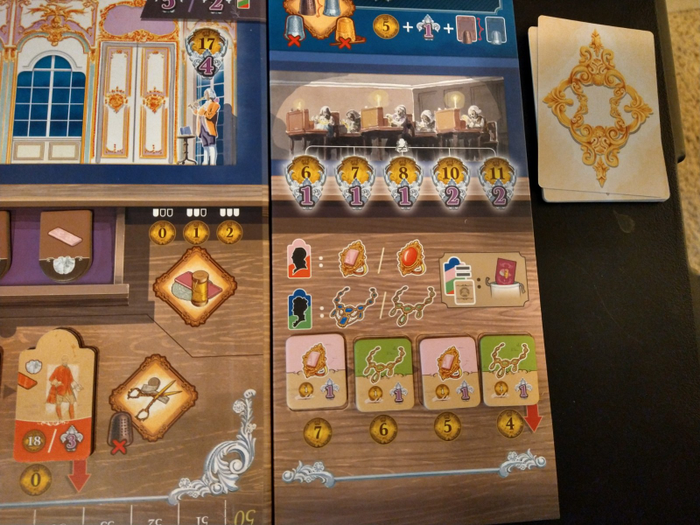 Not gonna lie, I had my eye on this game a while back, and I will shamelessly admit it's because I think it looks pretty.

That's pretty much how I chose books to read. No shame in that.

Gosh that board is pretty!

Nice review! I'll have to check out your video too when I have a couple hours to spare. Like everyone else I love the art. Almost wish I threw it in my #Mercado de Lisboa KS pledge just for that alone.

Thanks for the review! Love the look of this game. Now, how thematic does it feel? As in, does the gameplay put you into the shoes of a tailor? Or it it closer to being "dry" where you're mostly focusing on maxing out your points with efficient cardplay?

I would say closer to the shoes of a tailor.  You really have to focus on gathering materials and making garments to win the game.  Even when I chose to purchase a decoration it feels more like a side note as making the coats and dresses is definitely more fun.  Hiring employees and using bonus actions well is very important as well.  The tailors can work together in different ways and knowing all the staff in the game can help for sure.  This is one of those games that is fun to play even when you lose :)

Hmmm I really should look further into this. Thanks for all the info! The theme's a big selling point for my wife :)

Nice write-up! I remember being mildly tempted by the kickstarter for this by the art alone, without knowing much about the game, haha. Sounds fun!

Same here, and pretty much for any of these deluxe Ian O'Toole + Eagle-Gryphon Games products lol. Ian's style lends well to that deluxe vibe and I can't think of anyone else who can do it like he does (since he does both illustration and graphic design)

I didn't realize he also did the graphic design. Cool!