7 Months. That is roughly how long it has been since I backed the #Pax Pamir (Second Edition) reprint on Kickstarter. Since then, I have procured multiple different games that got me really excited and have truly enjoyed. These games include: #Too Many Bones, #Bus, #Aeon's End: Legacy, #Barrage. All excellent games and all games I have gotten some good plays in solo and multiplayer (sans Barrage).

When Pamir arrived on my doorstep, it was not the game that was front of mind. I have been working through TMB and Barrage solo play and have put Pamir on the back burner...that all changed when I opened this beautiful game, it changed even more when I sat down to play my first game on Thursday, and it has become more and more evident how excellent this game is. I just sat down this lazy afternoon to play a fully solo game against Wakhan and the game has consumed me!

Ok enough gushing, I want to provide you an idea of how my two plays so far have gone. The first play was with one other guy (he also purchased the game, we have been fanboying over this game for awhile) and Wakhan, the solo automa bot. We sat down to play and set it all up and had to do some research and reading as to be expected when playing a game for the first time and especially with a bot. We had some deck construction issues...there was a dominance check in the opening market...definitely not supposed to happen! We fixed it and took off.

Quick overview of how the game went. I chose the Russians as my opening loyalty, my friend chose the British I believe, and Wakhan is loyal to everyone. The game state really was fairly even for the first dominance check, we scored disks and I believe my friend took the lead there. Second dominance check came around and we were both loyal to the Russians and they were dominant...leading to a splitting of the points, blocks clear. It is anybody's game. I have always heard tha you typically shift your loyalties throughout the game, but I felt as though staying loyal to the Russians was the play, I had two gifts and had a strong disk presence. The final dominance check came out and I had the perfect card in hand to remove dominance from the British AND was rolling in rupees to buy the final dominance check to jump up and claim victory. Wakhan and I split the 8 points moving me to 11 point, Wakhan at 8 and my friend at 6.

Looking back, we made some Wakhan mistakes with her free actions and maybe a couple actions here and there, but it is really good having her with 2-players. She adds a level of uncertainty and a common enemy so that you are not at each others throats the whole game.

Second game, purely solo with Wakhan today and it went very quickly and smoothly! Wakhan started out by throwing out a crazy amount of Afghan armies and roads giving them a wild lead, so I switched from Russian to Afghan to take advantage of her aggression, scored big on the first dominance check, then the second dominance check was triggered by having two in the market and thankfully I had just pulled ahead in disks and there was no dominant coalition and beat Wakhan in about an hour.

This game is an absolute delight. You truly feel like a tactician having to evaluate the game state at all points, keep track of what the other players are working towards and how they can hurt you. My favorite aspect of the game is the different coalitions and how anyone can hop onto the dominant coalition at any point to neuter the current leader, though it comes with a price. The theme of the game comes out for me so much because I have seen the Heavy Carboard stream about three times and Cole Wehrle does such an excellent job of explaining not only the mechanics but also why everything functions thematically. My personal favorite is betraying a card in your own court to turn it into a loyalty prize, proving to your leadership that you can sacrifice anything and anyone in your camp to prove you are fully committed and loyal to that coaltion. I never would have thought about that had I not listened to Cole explain and unfurl the story this game tells. If you ever have a chance to play this game, or even better own the game. I highly recommend it. The barrier of entry is a little high because it is hard to understand the game state, but that comes with experiencing the game. The mechanics are simple and the components are UNREAL. I have only gushed over the game play but MAN the components are stunning and worth the higher cost. 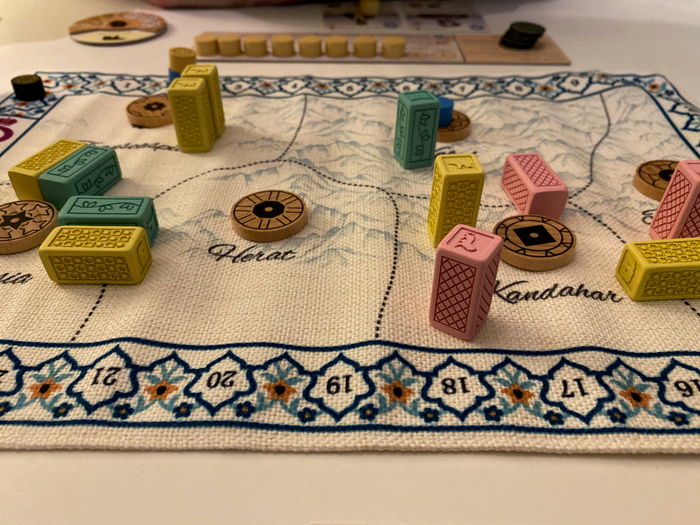 For some reason it would not let me inclue the picture, but this was from my first play!

This game is so photogenic.@philryuh we should definitely play again. I'm ready to give it another chance.

How many plays have you gotten in? I actually saw no appeal to this game about a year ago then something clicked and it totally took over my brain!

Sounds good! This week or the next? I just need to brush up on the rules

Let us know how it goes.

I threw a heart as fast as I could! Will read through this tonight 😀

Love it, thanks Phil! It really is a delight!!

Awesome, glad you're enjoying this so much. It immediately shot up to being my top 2 favorite game to solo after just one session. And seeing your post is making me want to get in a session this week lol

Has your friend also been diving into the solo mode? Also, have you been able to test out different strategies in each session?

Do it!! I felt like it hit the sweet spot for length and amount of work it takes to figure out Wakhan's actions! Some games it takes a lot...

He said he was gonna get a solo game in on Sunday but I did not check in on that. So far both games have been totally different. One I was totally loyal to the Russians and the other I was all over the place. I think this game is very tactical and you need to be able to change your strategy to take advantage of the game state.

I'm so pumped to get my copy.  I really really hope I can get it to the table next Monday (if it gets here in time).

Is it going to come today?

My FLGS is closed on Monday's so I won't be able to get it today.  But my game night is next Monday so hopefully it'll be in this week.

I highly recommend doing your homework so it goes smoothly and you can evaluate the game state for yourself and for other players. It helps having an "expert" to guide through the first play!

Good advice!  I did some homework about a month ago, but I'll definitely have to do some more before we get it out.  What is your personal favorite rules teaching video (if you have one)?

I have watched the Heavy Cardboard playthrough multiple times. Cole Wehrle actually teaches the game and makes it very clear. A little long winded but it is excellent.

Wow, this is so great! I'm so glad you've enjoyed it so much! Hopefully you get to play a lot :)

honestly, it plays really well solo...so even if I don't have a person to play with I'll for sure get this out a lot!!

Glad you finally got to play and are enjoying it!

I'm looking super forward to it.

So, do you expect it could be top 5 material for you?

I told my wife last night that it definitely has that type of potential for me. It is probably already top 10 to be honest.

That's good news..... How soon are you going to give us a report on #Barrage?

Still working on that one. I was not as familiar with the game or the automa on that one so I want to give it a fair shake down and I also want to get a multiplayer game in before putting together a report on that. Hopefully in the next two weeks!

Looking forward to it.