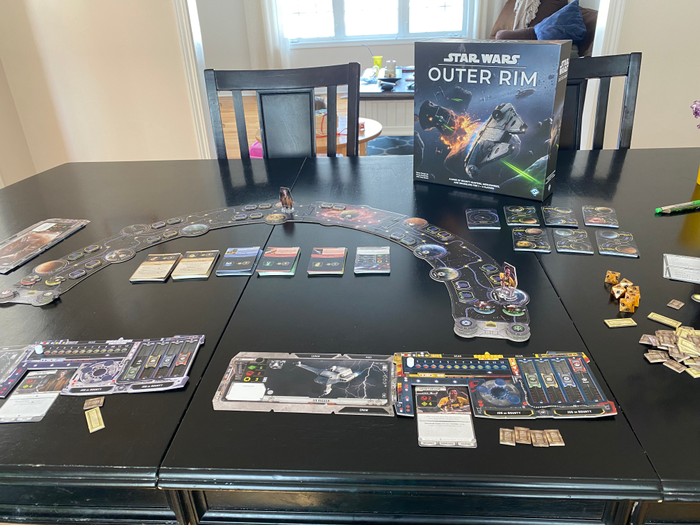 Hello and welcome to my Brian’s battery review for Star Wars: Outer Tim!

For those unfamiliar, Outer Rim is a game in which 1-4 players compete to see who can get to 10 fame points first. The game is set in the titular Outer Rim of the Star Wars galaxy and players travel around hunting down bounties, completing jobs, and delivering cargo. Every task you complete earns you money, fame, or both. Credits are used to pay for a myriad of things: gear or ship upgrades, to hire crew, or even to bribe Imperial patrols! The first player to 10 fame is the winner of the game and the most famous in the Outer Rim!

I’ve had the pleasure of playing this one both solo and with a group so I’ll be able to address both aspects this time around.

(+) This game is from FFG, so you know that the components will be stellar. And this game is no exception. The card quality is off the charts. The player boards are really cool and look very thematic. The actual board itself is modular and really cool to look at. The custom dice are unique and interesting. The art is Star Wars and it’s awesome.

(+) The rulebooks are great. This game follows a trend of having two separate books - one to learn to play and one rules reference. I personally really like this system because it allows the Learn to Play guide to focus on teaching the game while the reference can cover all the special cases and minutiae.

(+) This game is pure Star Wars. If you’ve ever wanted to play as Boba Fett and disintegrate your targets, here is your chance. If you ever want to drop your cargo at the first sign of Imperial trouble, here’s your game. The game is wonderfully thematic and all of the mechanisms tie together to make it a fantastic open world adventure. When playing you really do feel like you are in the world.

(+) The game utilizes a clever “databank” system to handle encounters or provide story information as the game progresses. Not only is this clever but it seems relatively expandable.

(+) Multiple paths to victory abound in this game. Want to play to the strengths of Lando and smuggle illegal cargo? Go ahead. Or do you want to take Lando and turn him into a bounty hunting machine? Go ahead and hire a crew and get it done! Or do a combination of everything as opportunities present themselves.

(++) As a huge Star Wars nerd I really appreciate how much thought went into this game. You can encounter some of my most favorite characters - like Grand Admiral Thrawn or the mighty Chewbacca - and complete missions for them or use them as crew members.

(+) The game plays well both multiplayer and solo. The solo mode features an AI opponent that realistically simulates a real opponent. Having played both modes, I can tell that a lot of thought went into the AI to make it a good facsimile of the multiplayer experience.

(+/-) I haven’t played at 4 player but I can imagine the game getting a little long at that high of a player count. At 3 players it was a decently long game, but solo it was relatively quick.

(+/-) I can see how long-term replay ability might suffer with this game as the databank is a set number of cards. It will take lots of plays to experience all the content but eventually you will see every card in the databank. Random setup certainly helps to mitigate this, but after you discover a job or character you might begin to remember what they want you to do. Good thing this is a FFG product so hopefully there will be at least one expansion.

Overall Outer Tim is an amazing open-world game that sets players loose in a thematic Star Wars sandbox. Players are free to pursue their own strategies with the end goal of acquiring 10 fame. I would consider this game a must own for Star Wars fans and a highly recommended product even if you aren’t a Star Wars fan.

I keep seeing good deals on this, one day I'll need to break down and just buy it.

Great review! Another star wars game to consider then...

Cool! Glad it was helpful for you. It's a great game with a great solo mode too.

Alright this may end up being the first Star Wars game I get.

Also I feel personally attacked with your Outer Tims, lol

Lol. I tried to keep it to a minimum.

I was really curious about this game! That artwork looks so good! Would you say this plays like the other Star Wars games (in terms of movement/miniatures)? That always seems to look a little finicky in the other games.

I’ve never found any Star Wars game to have finicky movement. So I don’t know if I can answer your question. But it’s a great sandbox game.

I'm glad you enjoyed it! I agree with all your points.

I find the gameplay excels with four players, as there are more people flying around doing things, but it does make the game significantly longer. I think that issue would go away once all players are familiar with the gameplay. I've played at 1, 2, and 4, and would be happy to play with any of those player counts any time. Outer Tim is so great.

Yeah, and people might have crew members that you're looking to capture for a bounty, so there's more interaction that way. Still, I think it plays well at all player counts.

That being said, and done, how long does a solo session take you?

I forgot to time it. But it easily fits inside my Sunday afternoon gaming time which typically lasts no more than 2 hours max.

I’d say it’s fairly average. There are quite a few cards and tokens to sort and such. But it’s not arduous.