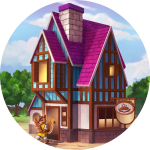 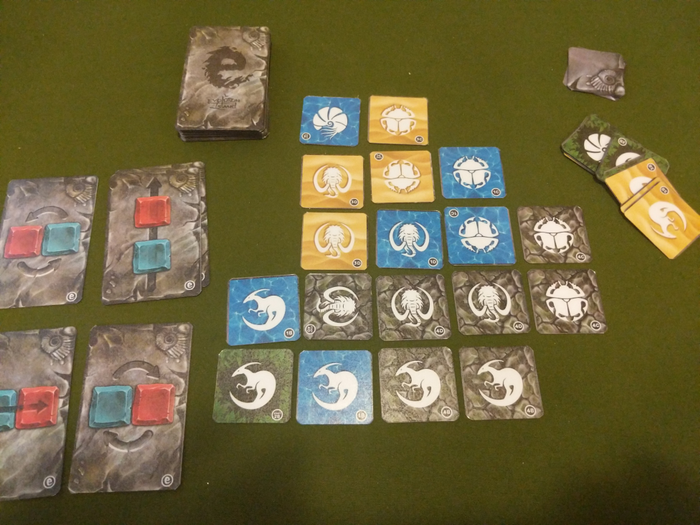 Evolution Island is a card drafting and tile area building solo PnP game by Aleksandar Saranac.  The objective of the game is to evolve one dominant land species and one dominant land type. The player who is able to build an 8+ HERD and an 8+ HABITAT wins the game.

The game consists of 36 Land Tiles (4 are designated Start Tiles) and 32 Change Cards.  The land tiles have one of 4 colors representing land types: Blue:Mountains, Gray:Forests, Red:Deserts, Green:Plains. Each tile also has 4 different icons representing: Elephant:Mammal, Frog: Reptiles, Dragonfly:Insects, Raven:Birds. A Herd is created when 3 or more icons are managed into making a connected group - connected is orthoganally joined on edges only. A Habitat is three or more colors connected in the same manner. "Unconnected" tiles of two or less are negative points in scoring at the end of the game. It becomes clear that a Habitat can be a connected area that houses multiple Herds and vice versa. This is the puzzle of the game.

The Change Cards are cards that dictate how Tile Cards are played each turn. The icon on each card either depicts a sliding/pushing motion, or a swapping motion. The placed tile is always the tile depicted in teal on the Change Card. These cards have an icon in the lower right for orientation - as orientation matters .

Play: Each turn the player MUST -

Play continues until both decks are depleted and player cannot replenish the hand - after 15 turns. The player should have 19 Tile Cards played out on the table to score.

Scoring: The rules have a scoring charts that help tally the final score. All unconnected tiles (Herd AND Habitat seperately) count against the player as -5. Then each Herd and Habitat is scored by how many tiles in the group. Three tiles score 1. Four score 3. Five score 6. Six score 10, Seven score 16, Eight score 21. Nine score 28.

This game is a pretty game. The cards are attractive, albeit probably hard for Red/Green color blindness. The theme adds a bit of flavor, just enough to make it work. The icons are distinct and functional - and well chosen. I'm not sure evolution as a concept is clear, but that is ok for the depth of the game. For a PnP there are 66 tiles to print. Not excessive; not simple.

This game works well as a solitaire game, The cards provide some randomness, but allow for planning with 4 choices to choose from in both hands. Instead of playing for 8+ of each group type, players can just play for scores until they get the hang of the gameplay. This approach makes the entry level play fun. Playing for the winning condition would take quite a lot of concentration and card luck. THis a game worthy of the time it takes to print and play.