On a whim, I recently picked up a used copy of #Akrotiri, which is a game in which I'd been mildly interested in for a while. I saw a good deal for a used copy in good shape, so I snapped it up!

This is a different sort of game than I've played before. All of the mechanisms are fairly standard; there's pick-up-and-deliver, action points, and tile-laying, but they're combined in a pretty interesting way. The goal of the game is to score points by discovering (or "excavating") ancient temples in a Greek archipelago that is being built by the players one tile at a time.

The game starts with each player being dealt 2 "map" cards (example here), that tell you the pattern of "terrain icons" you need to look for in order to excavate a temple. Players are also dealt 2 secret "bonus goal" cards, of which they keep one, to score extra points at the end of the game for meeting certain conditions. More of these will be earned throughout the game.

Turns go as follows - place a tile somewhere on the ever-growing board, and place 2 resources on it. Each of these tiles has one of the aforementioned terrain icons. Next, you have a certain number of action points, which increase as you discover temples. The available actions are movement, excavation (discovering a temple), loading resources onto your boat, buying new map cards, and "consulting the oracle" to get a specific type of terrain tile. So your turns will mainly be spent collecting resources so you can sell them to fund your excavations, and excavating. But, as we learned, it's also very important where you place your tile in step 1, since you want to be able to create new paths through the islands, while still placing the terrain icons in the patterns you're looking for.

It's a pretty interesting game! It's a good amount of strategy and fun for such a small box (same size as #Lost Cities), while not being overly complex. Did I mention it's also quite pretty? It's pretty (I'll put a pic in the comments). All in all, this is a winner for us. So far we've only gotten one play (this is a "first impressions" post, after all), but we're looking forward to our next!

About halfway through the game. 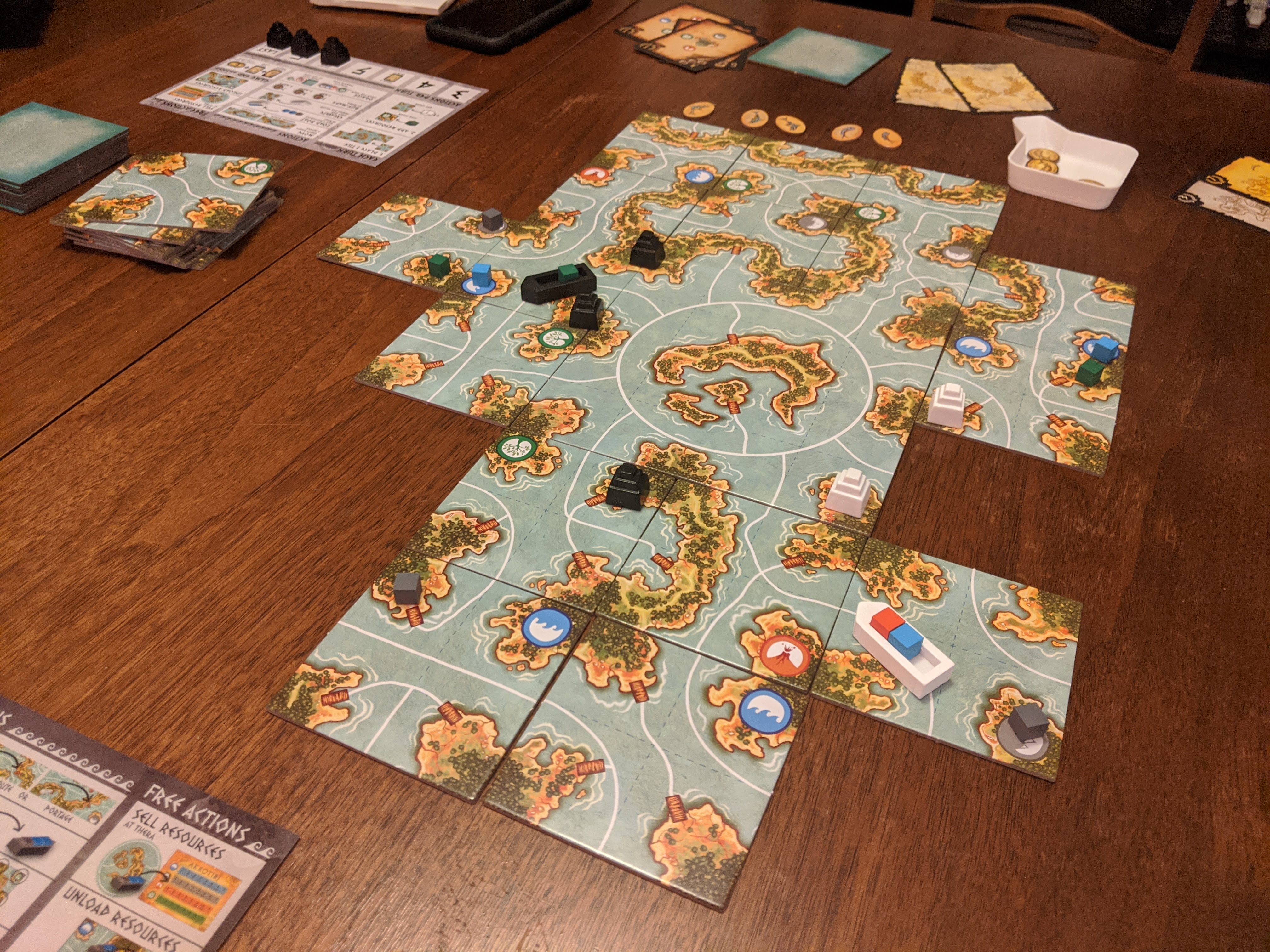 I've never even heard of this one! Why are there so many games?!

People don't want us to have money!

I've been mildly interested in this game, but never looked into it too much.

Well as you can tell, I recommend it! I was fortunate to find a used copy in good condition for a good price, but this one does seem tough to fine at the moment. I'm not sure if it's in between printings or out of print or what.

I imagine it will become more available at some point....

Hope so! For the right price it's a good game!