What Three Games in your collection have you played the most? 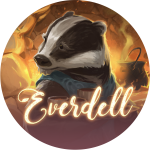 My wife and I have played Terraforming Mars a ton. Maybe 40 times..... Because it's so long, I'd have a hard time thinking of the number of hours.... after that we've played Splendor a large amount but those are usually quick, like 15 - 20 min, especially on trips and vacations.... so maybe 50 plays of that. Wingspan at least 15 times.  so it's knocking on the door. Oh wait, Ticket to ride if you don't count separate maps would definitely be 40 or so plays, including with non-gamers. There are other games I like more, but I was wondering which games actually get played the most by you? I'll start.

Everdell is number one played and my favorite game so that is good. Azul is number two because my wife likes it so much and Clans of Caledonia my number three played game.

Everdell is so fun.

1) Power Grid - I still have one gaming group who seem to only want to play this.  Probably have played 200 times.

3) Gizmos - this one is my wife's favorite.  It's the first game she handily beat me at - and she still probably wins 3 out of 4 plays.

1. #Just One - whenever it comes out, it typically gets 2 plays so it adds up fast.

1. #The Quacks of Quedlinburg

Have you played Quacks with the raised complexity? I haven't but I remember seeing there were alternate card options for the different "powers"

I have played all of the different ingredient variants! Is that what you are referring to?

1. Gloomhaven (easily the most total plays)

2. Wingspan (my wife and I play this one the most)

3. Century Spice Road (my daughter frequently calls for this one)

Gloomhaven is my number one also

I didn't know there was a RA dice game.... By Knizia's Bones, I will have to investigate this... Ra: The Dice Game

It's pretty hard to come by nowadays, but it would be easy enough to do a PnP with blank dice until you can find a copy.

Unsurprisingly, mine are 3 quicker games:

Interestingly, #Wingspan is actually a close 4th! That surprised me since it takes a while to set up and teach, but I've played quite a few times with my wife, so that helps! Everdell is hot on the heels of Wingspan, as well!

Dominion. We had a 6 month period where we literally played at least once a day. That plus my other plays puts me well north of 200 maybe 250.

Race for the Galaxy. I don't know how often I've played it, but it's been 30ish pairs since I started logging.

Prob Carcassonne is third. It is my game of choice with non gamers.

Wow, that is a crazy total for Dominion!

I think great is an overstatement, it was like nothing else in it's time, and it was an interesting new mechanic. I find the theme bland and the interactions boring to play now. I logged 20 plays myself. My wife loves it, but for me it's just an average game.

To be clear, there is no theme, and the artwork is not good.

But, I do believe that the purity of the game makes it great.

I still have yet to play it!

Missing out, you are.