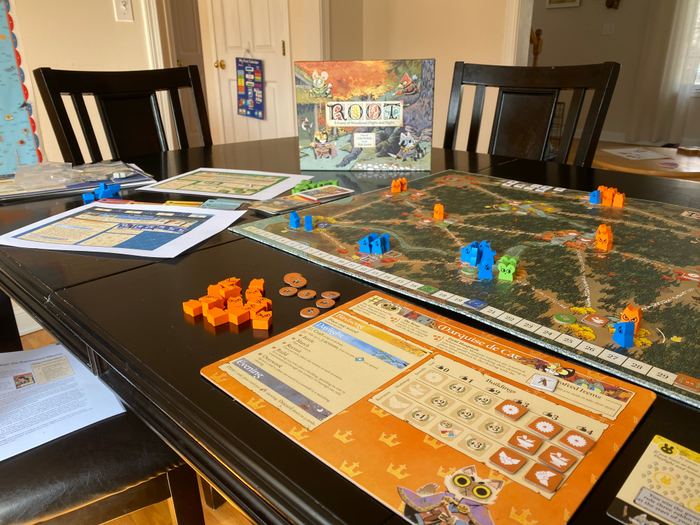 Back again with another Brian’s battery review for Root, played solo using the Better Bot Project. The Better Bot Project originated as a print and play AI system to recreate the multiplayer experience of Root in a single player model.  The Project was so fantastic and well done that the designers actually incorporated the system into an official expansion for the game.
Normally I’m extremely hesitant to use print and play variants. I find that the printing portion never turns out quite right and ends up being distracting as the quality is so poor. I’m also too cheap to actually spend money to have them professionally printed (I also that kind of defeats the purpose). But in this case the game is worth suffering through the distractions. Because It. Is. So. Good.
For those unfamiliar with Root: Root is an extremely asymmetrical war game hidden under beautiful, lovable, phenomenal art. The art belies the true nature of the game - it can often be cutthroat and tense; each round is suspenseful. The base game contains 4 factions, all of whom play almost like their own board game. (There are multiple expansion factions for this game but I was only able to acquire the base game)
The Marquis de Cats use euro-style engine building to maintain control of the woodlands while the Eyrie uses action programming in their bid to win the forest. The Rebel Woodland Alliance uses Guerilla warfare and ambushes to win support while the Vagabond feels like Link from the Zelda games going on his own adventure amongst it all.
Despite how different each factions play, all players each have the same goal: to earn 30 victory points and win control of the woodland.
Let’s pounce on in to the review:
Component quality (+++): Wow. Just wow. Look at those stunningly cute wooden Meeples. Gaze in wonder at the beautiful art in the cards and on the game board and player boards. The card quality is phenomenal. The cardboard for the tokens is excellent. No complaints at all about the components.
Rulebook (+): The rule book is great. It’s done in that newer style where you have a learn to play booklet as well as a rules almanac. This style is great because once you become more familiar with the game you only need to reference The Law of Root and not mess around with the learn to play portions. The paper used for the rulebook is great and the art and examples are fantastic.
Box size (-): As much as I love this game I am really annoyed with the size of the box. It’s JUST barely big enough to hold everything and I think that the included insert is worse than just using the box. I actually took my insert out and decided to store the game without it. For all the greatness of this game this is a minor quibble.
Faction Asymmetry (+++): The diversity of the factions is incredible. It really feels like they took 4 unique games and mashed them together. And yet it still feels balanced. I can’t imagine how much fun this would be multiplayer because it’s so great solo.
Multi-Use Cards (+++): Despite the incredibly varied play styles all factions utilize a common shared resource: cards. Cards are a precious resource and you never feel like you have enough of them. The cards also have multiple uses that lead to agonizing decisions. Do you use that card to craft a powerful ability? Do you save it to use during combat? Or do you spend it for a faction ability? Delicious decision making.
Better Bot Project (++): The Project is a stroke of genius. It hits the trifecta of AI abilities: 1. Easy to run. 2. Realistically simulates a human player 3. Challenging. Very well done.
Root is phenomenal. I can’t wait to add some of the expansion factions in the future. I also look forward to the day when I can play it multiplayer. An excellent game with an excellent print and play variant.

Ohhhh, I totally forgot to comment on your descriptions of the factions, which I loved.  As soon as I saw how the Vagabond played I was thinking, this is like a mini version of Zelda.

Thanks! The little sword and boots definitely take me back to Zelda on the SNES.

That's a lot of pluses I've never seen before on your other reviews! Must have great prospects to climb its way to the top of your top 5?

Great write-up and you hit on points that I really like about Root but wouldn't have been able to express. I've yet to play as the Vagabond but want to. I used to be a bit intimidated about trying them out but after watching a video, their actions made a lot more sense. Hoping to get in a solo game this week after getting into the rules and printing out better bots. It's also one of my most photogenic games (alongside Viticulture) and I made an ad image out of it to capture the essence of BGA (not sure if it's smart of me to use WA to represent us though haha) 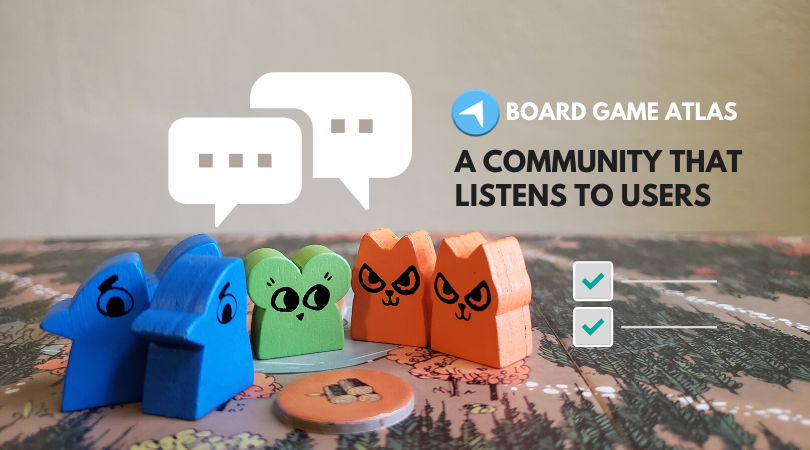 Oh yeah, Viticulture is so photogenic.  I can't wait, I think I'm going to get a solo play (of Root) in tonight.

A friend asked for my Top 5 last night and Root featured at #5.

Also we are absolutely the Alliance. Upstart community tried of the old fashioned oppressors.

What parts did I get that you wouldn’t have been able to?

So has it peaked your interest in the COIN games? Games like: #Falling Sky: The Gallic Revolt Against Caesar, #Pendragon: The Fall of Roman Britain, #Liberty or Death: The American Insurrection.....?

I’ve always had cursory interest in those Roman themed ones. But maybe?

We could also accuse Phil and Trent of being the Riverfolk as they peddle their wares (giveaways) to draw new people to the site.

Can't argue with that one lol

Haha, nice.  Or are we the Lizard Cult, reaching out to those who feel discarded by the bigger site?

Also, awesome it's already in your top 5.  I do hope you get to play it multiplayer at some point, because the table talk aspect of the game is so fun.

Hmmm good question. There are loads of things I love about Root and one of its surprising qualities is that it's quite... "minimal" or "efficient". There aren't tons of components in the game in comparison to how complex the gameplay is, and it goes hand in hand with your point about the multi-use cards.

Another aspect of Root that I really like is that you should almost always be concerned about even the simplest action performed by another player. I love that a simple act of a player putting down a piece of cardboard (e.g. sympathy token) has players immediately thinking about how they should respond to the change in board state.

Gotcha. It’s such a delicious game. I think it’ll be even better multiplayer.

I used the Mechanical Marquise to teach my daughter the Eyrie.  It's a great way for me to introduce even my 7 year old to the different factions of the game.  I'm excited to practice the Eyrie with her again and then maybe teacher her the Woodland Alliance after that.

Great! Did you use the official mechanical marquis or the better bot one?

Better Bot.  Everything I’ve seen makes me think it is vastly superior.

Definitely feels that way in my experience.

I think I’m still making mistakes with a few of the minor rules. And I definitely had to watch tons of learn to play videos with the bots. It wasn’t the easiest thing to learn.

Who did you play as?  What was the best way for you to learn how to run the bots?

I liked the Rebel Alliance better. As a player I don’t take enough risks to continually be building like the Cats need to do.

Mmm gotya.  I feel like probably the Marquise are the lowest on what people like to play.  I try to enjoy them for what they are when I play multiplayer in case I need to run them.  But I also know the Duchy is supposed to be a faction that can replace the Marquise.

The Woodland Alliance has ebbed and flowed for me.  Sometimes I really like them, sometimes I don't.

Also, I think it's a huge testament to a game when you can lose a lot and still have an awesome time.  I really like the Lizard Cult, but they are pretty much universally seen as the most difficult to play and win with.  I think I've played them 4 times and I'm 1-3 with them.  But I still love playing them.

Rebel alliance?? I assume that you call it that because of your heavy star wars influence.