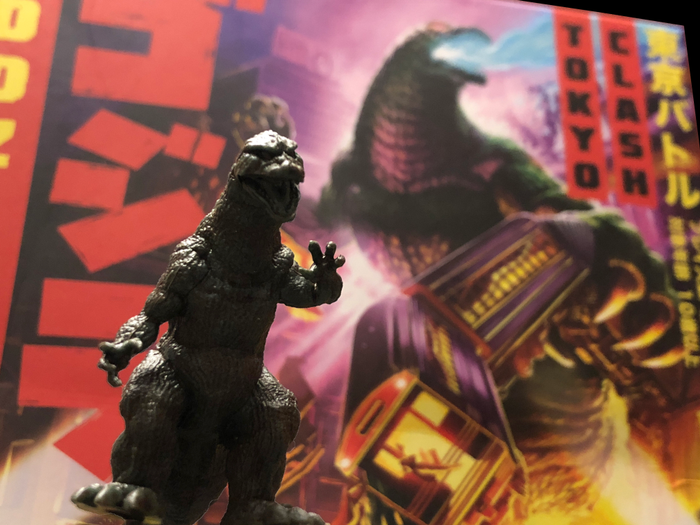 Let’s face it, smashing buildings and throwing other monsters around has always been appealing. After all, video games like Rampage exist for the sole purpose of, well, rampaging in a city. Fortunately, Godzilla has made his way to the table.

#Godzilla: Tokyo Clash is a rock-’em sock-’em game of light strategy in which players control one of four monsters (Godzilla, Megalon, King Ghidorah, and Mothra) in an all-out battle to show, once and for all, who the biggest, baddest monster is. And while Mothra is there mainly to help protect the humans, he’s also happy to get in on the fun.

First of all, you can’t help but obsess over the “miniatures” used in the game. The monsters look like actual toys! And the large, 3D buildings help add to the table presence. If I were going on looks alone, I’d be all over this game! But, there’s more to Godzilla: Tokyo Clash than simple aesthetics. It is a strategy game (as indicated on the box), but I’d like to point out that “strategy” is used lightly here. Sure, you’ve got to plan your moves and manage your power to play cards and whatnot, but the main strategy of the game feels more like making the best of what you’re dealt rather than deep strategy. So, “light” strategy is probably a better way to go.

Still, the gameplay is loads of fun. For you thematic gamers out there, you’re going to enjoy this, as theme just drips from the gameplay. For you gamers interested in more meat…well, there’s meat on the monsters, so maybe that will sate your palate. 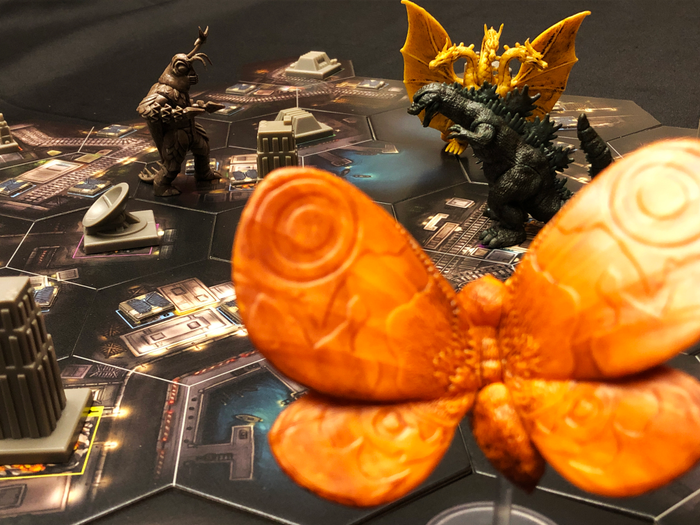 Godzilla: Tokyo Clash is played over a series of rounds. Most of the action (well, all of the action, really) takes place in the Action phase. Here, players take turns taking one action. They can play a card from their hand (paying its cost in delicious power), discard a card to move or throw something (yay for throwing!), or pass.

Now, each monster has their own unique deck of cards, and these cards will have everything from attacks, defense, upgrades/enhancements, and other nifty actions that will help you dominate. Ranged attacks are good for keeping your distance, but you can’t throw stuff with those types of attacks. Getting up close and personal is always the most fun (for me, anyway) because I can deal whatever damage the card says or throw a vehicle or another kaiju (see also: monster) to destroy stuff and get energy. 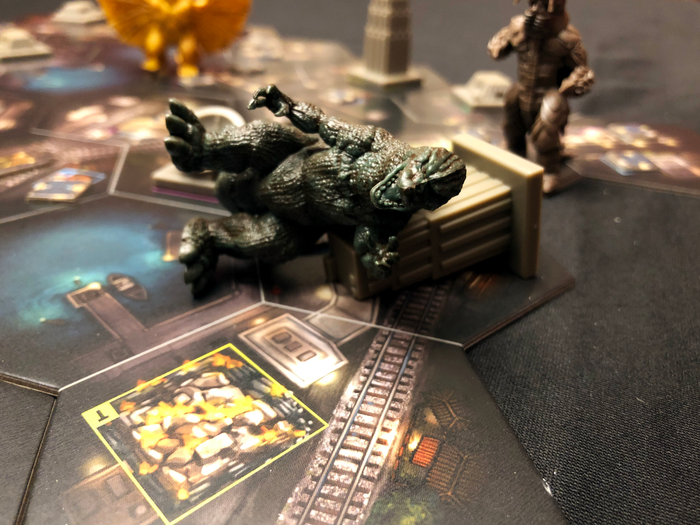 Destroying buildings and vehicles provide energy, and energy is used to play cards. The large, 3D buildings also grant a one-time ability for the monster who destroyed it. And by that I mean the monster who threw the other monster into it. The flailing sack of kaiju the crashes through the building doesn’t get such perks. At any rate, these bonuses include extra power, taking a card from your discard pile and putting it on top of your deck, peeking at another player’s top card on their deck, and drawing an additional card.

Looking at the top of another player’s deck is always good because, when you deal damage to another kaiju, you draw as many cards from the top as they took damage. Then, you take one of the cards that has points on it and discard the rest. So, if you deal 5 damage to Mothra (ouch), you take the top five cards from Mothra’s deck and choose the one with the most points. But, if you only deal one damage, you only draw one card and hope for the best. Fate isn’t always the nicest of players, so you can usually expect to draw a card with zero points if you only get one to choose from. So it’s always better to inflict as much damage as possible.

This was actually something we didn’t care for too much about the game. Regardless of how you do, your points are given to you by the luck of the draw. And there is always the chance that you’ll be stuck drawing the zero- and one-pointers when everyone else is drawing twos are threes.  But, you still get to smash stuff, and as we know, having fun is more than about winning.

There are multiple event cards included in the game as well, two of which are used each game. The two events they have you start with for your first game is Rush Hour and Armored Assault. Rush Hour is pretty simple—trains move back and forth along their tracks at the end of the round. What good are they for? Throwing, of course! Each train gives you 3 power when you destroy it, but you might as well destroy it by throwing it at something (or someone…). 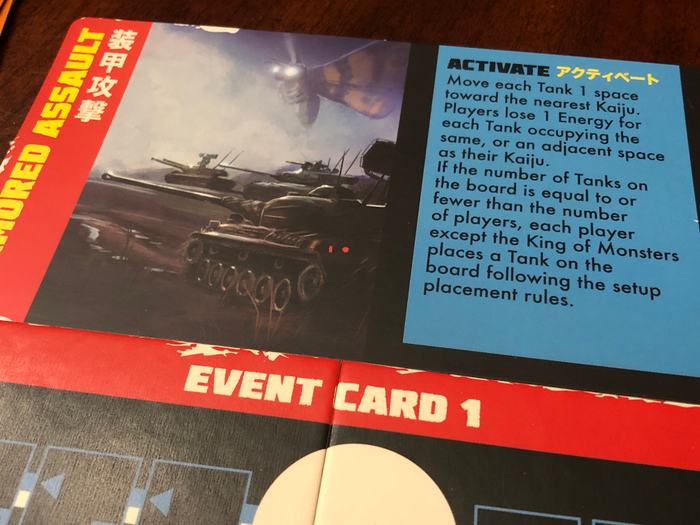 Armored Assault is a little more interactive, as, at the end of each round, all tanks on the board move one space closer to the nearest kaiju. If a tank is adjacent to or in the same spot as a kaiju, that kaiju loses 1 power. Except for Mothra. Mothra is helping the humans, so they don’t fire on him/her/it/that thing.

But there six events in all, so you can mix them up for some fun scenarios. Some notables are the Xilien Invasion and Air Strikes. Have fun with these, as they will affect your strategy throughout the game.

Anyway, turns go back and forth, player to player, until all players have passed consecutively. Then you refresh (draw cards), activate the events (watch out for tanks!), and move the Oxygen Destroyer marker down one step.

Oh yeah, that’s another thing. The game ends when the Oxygen Destroyer marker meets up with the small buildings on the Damage track (each small building destroyed gets placed on the damage track, moving up, while the Oxygen Destroyer moves down). When that happens, those nasty humans rid the city of oxygen, effectively eliminating all monsters. (So who really wins, huh?) Once the humans activate their Oxygen Destroyer (rude…), and once it’s safe to venture back into Tokyo, players count their points from their trophies (i.e. cards stolen from other players’ decks for points) and the player with the most points wins. But don’t forget the King of Monsters token! The player who holds that at the end of the game gets two extra points, which is enough to go from loser to winner (yes, that has happened to us). The last player to hit another monster (in the game, so don’t be a meanie head) gets the King of Monsters token (which also grants its holder an extra card when drawing up to hand size after the Action phase). 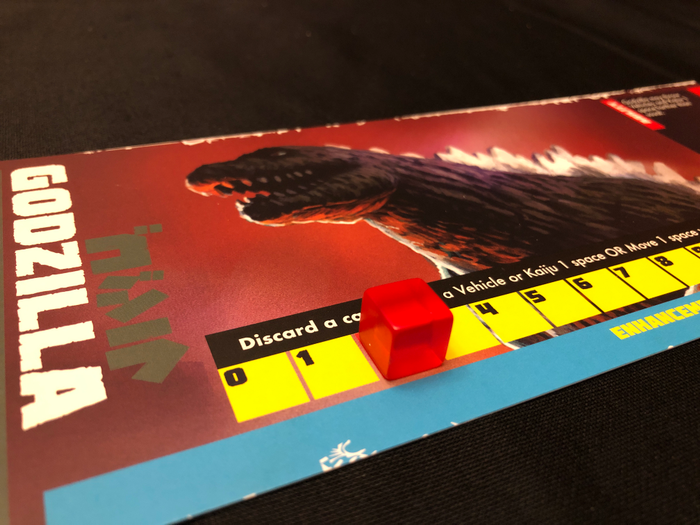 Godzilla: Tokyo Clash is theme incarnate. They’ve got everything from cool-looking toy figures to mechanics that put you right in downtown Tokyo. Throwing tanks and smashing buildings is really what this game is about, and the theme certainly does it justice. 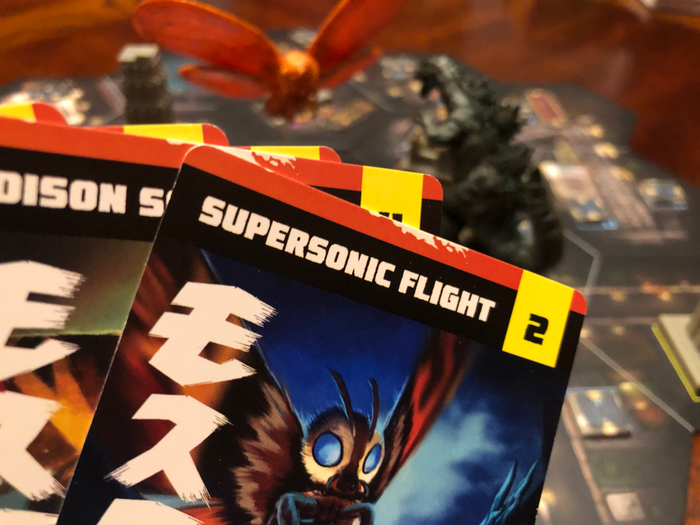 The art is a grungy, used look that had me quadruple checking my cards and monster board to make sure it really was the artwork and that they weren’t peeling. It’s a neat look, and while it gives my wife anxiety to look at, I think it’s a rather fun aesthetic. The overall look of the game is very thematic, so good job, N/A! (That’s who Board Game Geek says the artist is, anyway…)

Games can take a while to play for new players. Playing at two players took us about an hour and a half, and playing at four players took roughly 2.5 hours. Once everyone gets the hang of things, games can go much faster. But, even those long games were fun and enjoyable, so there’s that. 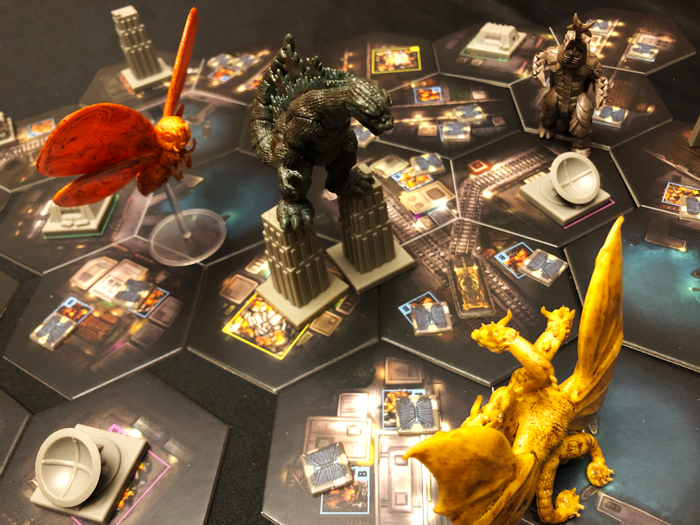 Gosh, Zilla! What a game! I, personally, enjoy the carnage of the game. Smashing and throwing and stomping and running away from tanks and naval bombardments is what this game is about, and it’s a nice reprieve from deeper games. But, that said, it won’t appeal to all gamers due to its lighter nature. But that said, it’s always fun to relax and cause some mayhem once in a while, right? And Godzilla: Tokyo Clash is all about mayhem (are you in good hands?).

This game will come out with the kids (in a few years, once they can actually read enough) or for light-hearted game nights. If I’m looking for a game to make me think—even just a little bit—I’ll go with something else. But there is definitely a place for Godzilla: Tokyo Clash at our home.

If you had the option to throw a tank into a large monster or throw a large monster into a building, which would you choose? And perhaps more importantly, why? Let us know in the comments! 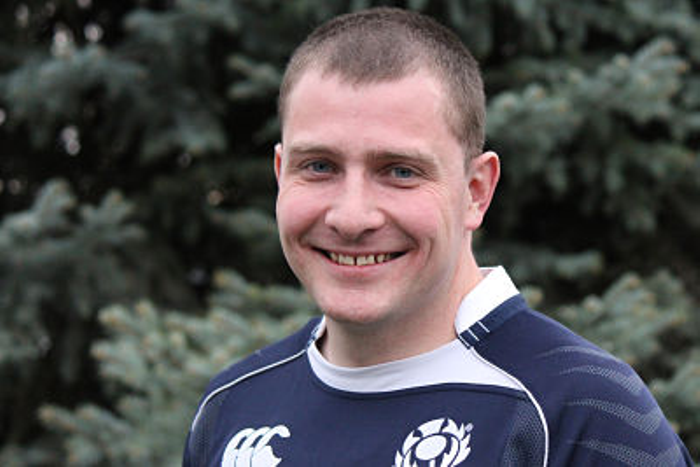 I want to like this game but I don't think I'm quite there.

I totally get that. What are your hangups on it?

I've casually had my eye on this one for a while. I absolutely love the art and components, and it seems to me like they nailed the theme, aside from the winning conditions. Something about winning via point scoring doesn't seem right for a game about monsters bashing each other. The play time gives me pause, though. 1 hour for 4 players would seem about right, but over 2 hours doesn't seem to be quite worth it. I notice the game's page actually has it at 45 minutes - do you think it could approach that time after a couple of plays?

Yeah, the win condition does seem weird. As for playtime, it really shouldn't take longer than an hour, even at four players. I was surprised when those games too so long. It will definitely get faster even after one game. The first couple of games you are still familiarizing yourself with the rules. Turns should be played quickly, but with new players, they tend to spend a lot. Ore time considering their cards and trying to remember what else they can do.