AdapTableTop: A Modular System for Board Games and RPGs

Some of our favorite games have large boards, and we find ourselves pulling up a small side table for the cards and bits. Or the player boards are just large enough that they don't fit comfortably in front of us while playing. And sometimes it would be really nice to have a cup of tea while playing, but who wants to take the chance of it spilling on the board?

GameStart Edizioni has been developing and refining a modular design, called AdapTableTop, that tackles those issues. The board sits above the table (on two-height modular legs) so that there's space underneath for those cups of cubes. There's room for our player boards, and our cup of tea (or, at least, a bowl of pretzels).

Playing a game with lots of dice, such as an RPG? Now you have more room to roll. You can also make multi-level maps for RPGs and miniature games.

There are five Kickstarter-exclusive colors (gold, red, blue, black, and green) in addition to the standard silver, and a gift for backers during the first 24 hours, so be sure to check out the campaign before it ends on June 4, 2020.

AdapTableTop is a modular system for board games and RPGs that expands your gaming space.

It's customizable, stable, and comes apart to store or take to game night. There are no screws or metal parts. The ATT can be used with all of the panels, only one, in two halves, or many other combinations.

The beehive grid underneath allows you flexibility in where to use the legs. The two-height modular legs give you the choice of 8 and 12 cm (3.1 and 4.7 inches).

All Kickstarter bundles also include three .stl files for thematic legs, and the designers made the technical data of the joints open source so that so that anyone can personalize their ATT with any 3D printer.

The ATT is designed to be compact during storage, yet still hold up to 9kg when assembled.

Silver is the standard color option. Kickstarter backers will have the option of five exclusive colors: gold, red, blue, black, and green.

There is a gift for backers during the first 24 hours and a video showing how easy the ATT is to put together, plus lots more, so be sure to check out the campaign before it ends on June 4, 2020.

I was initially interested in this. What if I need to look at the other players tableau for making strategic decisions(Scythe, GWT, On Mars). Wont the view be obstructed? Can anyone offer any thoughts on this. I like the concept but this is what is holding me back.

When we play, we often face each other and have the board off to the side. So that's what I envision here, the board to my left, bits or draw piles underneath, with our player mats/tableaus in view.

This looks pretty neat! Thanks for sharing!

If you get an extra set of these, feel free to send me one! It looks really useful. 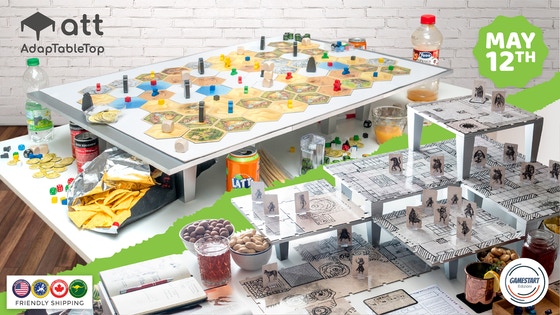