Board Games by Daniel Alves

These are the board games designed by Daniel Alves.

CrowdfundingChronicles of Drunagor – a Magnificent Dungeon Crawler Coming to Kickstarter

by Gwido Idziak | updated 4 months ago

Today we decided to write about an amazing project we’ve stumbled upon while browsing some drafts of upcoming KS campaigns. A huge dungeon crawler game, with minis and a ton of innovative mechanics? Count us in! The campaign is planned for October 29th, so let’s talk about what we already know.

Chronicle of Drunagor and Its Origins

Chronicles of Drunagor was made by the very same 2 designers, that created the original Masmorra: the Dungeons of Arcadia, which later became CMON’s Arcadia series – Daniel Alves and Eurico Cunha Neto.

The new game makes heavy use of the insert included in the box to bring some 3D tactics into gameplay. Dungeon tiles are laid out on these, and after adding some bridges, corridors and door – end up as pretty great looking dungeon ready for exploration. Positioning and the floor at which your character... 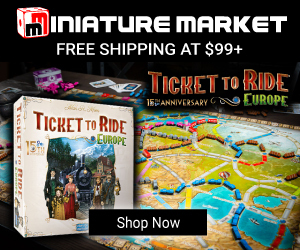