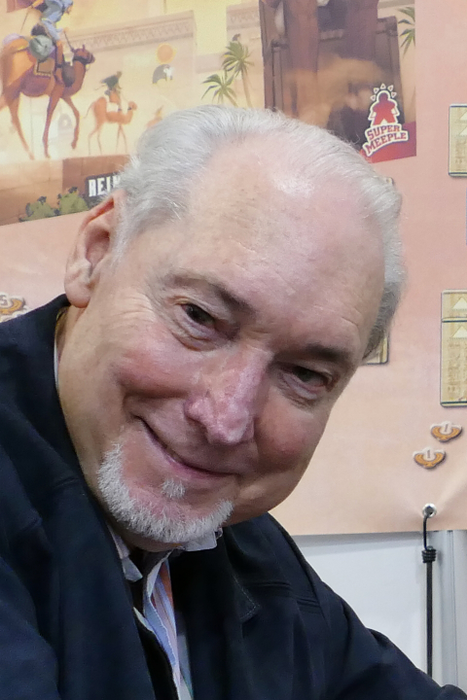 Wolfgang Kramer is a German board game designer. Kramer formerly worked as an operations manager and computer scientist, but since 1989 he has worked full-time on game design. He has designed over 100 games, many which have been nominated for or have won the Spiel des Jahres.

ReviewGhosts of the Moor (Game Review by Brandon Kempf)

(https://opinionatedgamers.com/2019/04/07/ghosts-of-the-moor-game-review-by-brandon-kempf/) [Ghosts of the Moor]

by trentellingsen | updated 16 months ago

If you could play games from one designer for the rest of your life? | Comment

Uwe Rosenberg goes from quite light with games like Cottage Garden, Patchwork, Spring Meadow etc... All the way from that to games that are medium heavy to heavy.

Vlaada Chavitil I don't think it's a good choice for you. But he has 8 of his games in the top 200 of BGG and they run the gamut from Codenames to Mage Knight. If all you are looking for is solid games with a huge variety of weight to choose from you could do worse than go with him.

One other option is Michael Kiesling. I don't know if this counts or not, but he has designed a number of good lighter games, like Azul. But, also, in company with Wolfgang Kramer he had designed a plethora of solid midwwight Euro games.

Isle of Cats (Deal of the Day)

Today only for $50.00 $27.97! Game Nerdz has the lowest prices, best shipping policy, and free shipping with orders of just $75!
Visit
Giveaways